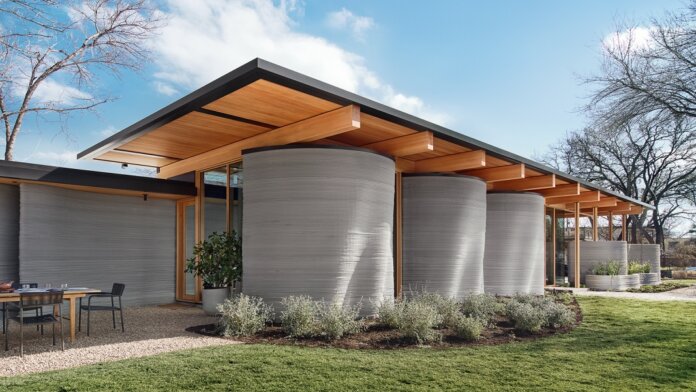 It’s no secret America is in the midst of a housing shortage, with home prices ballooning, supply remaining stagnant, and would-be homebuyers frantic to secure an affordable place to live. Supply chain backups due to the pandemic made building materials more expensive and caused long delays, and there’s a labor shortage too. Worryingly, the situation doesn’t show signs of getting better anytime soon.

In an inspiring presentation at South By Southwest last month titled “It’s Time to Build” (perhaps in reference to Marc Andreesen’s compelling, widely-circulated 2020 blog post of the same title), ICON co-founder and CEO Jason Ballard shared his vision of a new paradigm in homebuilding, and the power of 3D printed houses to change the construction industry.

If offered a 100-year-old home versus a home built a year ago, he said he’d take the 100-year-old home. It’s a sad state of affairs; in what other industry would you choose something very old over something brand-new? But construction quality and materials have devolved to a point that this is the reality we find ourselves in.

On top of that, this decrease in quality hasn’t enabled the quantity we need; the US builds two million fewer homes than needed each year. That lack of supply then feeds a cascade of related problems: builders resort to less-skilled labor and cheaper materials, and they leave design professionals out of the process entirely.

City regulators add to the problem with strict zoning and building requirements. The result, Ballard said, is what he calls soul-less housing. You’ve seen it: the cookie cutter subdivisions where every house looks the same, maybe differentiated by paint colors or landscaping, but otherwise pretty bland and Truman-Show-like.

Zooming out from the US, there are 1.6 billion people around the world who lack adequate housing, whether they’re in unsafe buildings, lean-tos, shantytowns, or unhoused. “We’re going to have to innovate like our lives depend on it, because there is not a bright human future if we can’t shelter ourselves appropriately,” Ballard said. “It’s time to find new ways to build.”

He then posed the question: what if we could build houses that were twice as good, in half the time and at half the price? He believes his company can do it.

ICON was founded in 2017 and has exploded in the five years since, raising $451 million in equity and approaching a valuation of $2 billion, delivering two dozen 3D printed homes and structures (including houses in Austin, a community in Mexico, and military barracks in Texas), and receiving several design and innovation awards. During SXSW the company unveiled its sleek, architecturally innovative House Zero in East Austin, a home “specifically designed to utilize opportunities created by 3D printing.”

The company’s gantry-style 3D printer is called the Vulcan, and it builds homes by pouring a concrete mix into a software-dictated pattern; instead of one wall going up at a time, one layer is put down at a time, the whole structure “growing” from the ground up. The printer consists of an axis set on a track, giving it a flexible and theoretically unlimited print area, and its software can be operated from a tablet or smartphone.

“If we could find a better way, we wouldn’t be 3D printing,” Ballard said. “It’s the best thing we can find.” He pointed out that at a lot of construction sites, there ends up being more waste material from the building process than there is material in the building, while with 3D printing “not a drop” of the concrete mixture is wasted.

ICON plans to break ground this year on a 100-home community in the Austin area, and continue to scale up its operations from there. Ballard firmly believes robots and technology will be an integral part of solving the global housing crisis. “There are not enough humans who know how to build things to get us out of the problem that we’re in,” he said.

“We want 3D printed homes to be the best homes,” he said. “We can solve the global housing crisis in our lifetime. We’ll see a better world with our own eyes. And I insist on it.”

He received a standing ovation.