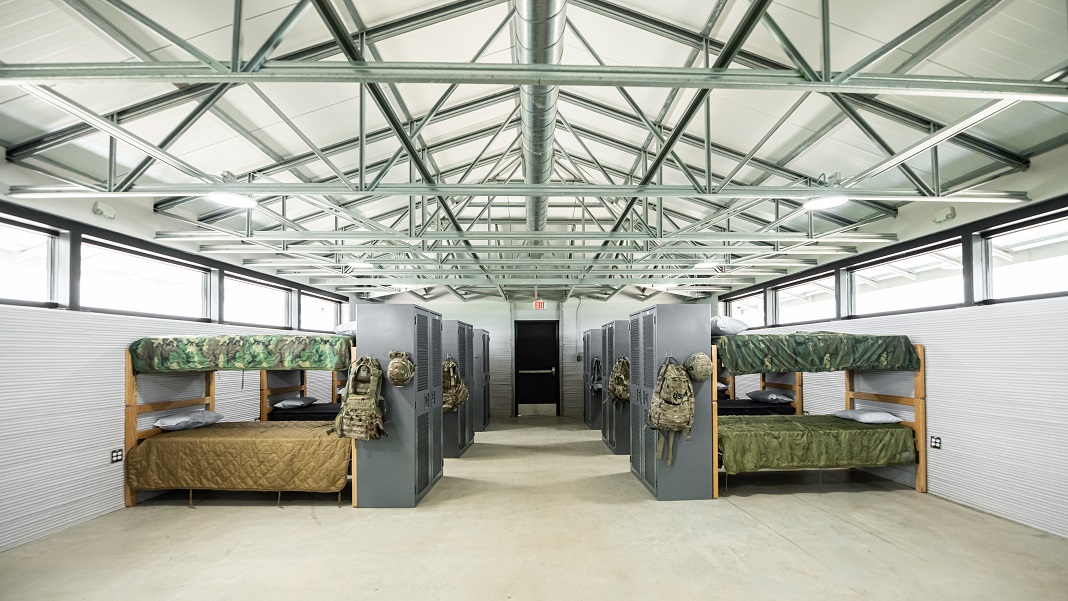 3D printing is picking up speed as a construction technology, with 3D printed houses, schools, apartment buildings, and even Martian habitat concepts all being unveiled in the last year (not to mention Airbnbs and entire luxury communities). Now another type of structure is being added to this list: military barracks.

ICON, a construction technologies startup based in Austin, Texas, announced the project earlier this month in partnership with the Texas Military Department. At 3,800 square feet, the barracks will be the biggest 3D printed structure in North America. It’s edged out for the worldwide title by at least one other building, a 6,900-square-foot complex in Dubai used for municipal offices.

The barracks are located at the Camp Swift Training Center in Bastrop, TX, and are replacing temporary facilities that have already been used for longer than their intended lifespan. 72 soldiers will stay in the building, sleeping in bunk beds, while they train for missions and prepare for deployment.

“The printed barracks will not only provide our soldiers a safe and comfortable place to stay while they train, but because they are printed in concrete, we anticipate them to last for decades,” said Colonel Zebadiah Miller, the Texas Military Department’s director of facilities.

The energy-efficient barracks are being built with ICON’s Vulcan 3D printer, the initial iteration of which was 11.5 feet tall by 33 feet wide, made up of an axis set on a track. The printer’s “ink” is a proprietary concrete mix, which it puts down in stacked layers from the ground up. The building was designed by Austin-based Logan Architecture, a firm that had previously worked with ICON on the East 17th Residences, four partially 3D printed homes that went on the market in Austin earlier this year.

Soldiers will move into the barracks this fall.

With the announcement of $207 million raised in Series B funding this week, ICON is well-positioned to launch several more projects in the coming months and years. In May the company unveiled both its new Vulcan printer—1.5 times larger and 2 times faster than the previous version—and its House Zero line of homes, optimized and designed specifically for construction via 3D printing.

TechCrunch reported last week that ICON’s revenue has grown by 400 percent every year since its 2018 launch. The startup tripled its team in the past year, hitting the benchmark of over 100 employees, and plans to double in size again within the next year.

What this all comes down to is that a lot of people and organizations are seeing the benefits of 3D printing as a construction tool, and at the rate the technology is growing, houses and barracks are just the beginning.

“ICON continues our missional work to deliver dignified, resilient shelter for social housing, disaster-relief housing, market-rate homes, and now, homes for those serving our country,” said ICON co-founder Evan Loomis. “We are scaling this technology across Texas, the US, and eventually the world. This is the beginning of a true paradigm shift in homebuilding.”