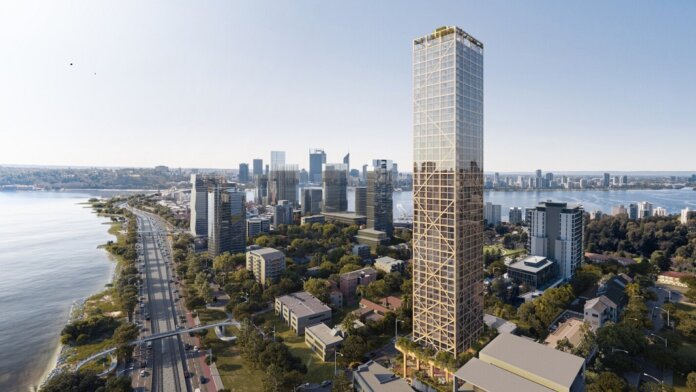 Construction is a major carbon dioxide emitter, with eight percent of global emissions traceable to the cement industry and another eight percent coming from steel production. Engineers and entrepreneurs are testing out new ways of building things—in terms of both methodology and materials—to make construction more eco-friendly, not to mention cut its costs and provide better spaces for people to work and live in. 3D printed houses are one trend that’s been on the rise for a couple years. Now it seems an equally innovative trend is developing: high-rise buildings made of wood.

Plans for two such buildings were announced in the last week: the first, in Switzerland, will be 328 feet (100 meters) tall and made entirely of timber. The second will be almost twice that height at 600 feet (183 meters) in South Perth, Australia, but will have a concrete core, which designates it as “hybrid timber.”

If the thought of a 60-story timber-frame building doesn’t seem all that different than a few very tall toothpicks bound together, you’re not alone. The idea of a skyscraper made of wood is a bit bizarre, as there’s a host of reasons not to use the material for this particular purpose. Some of the first that come to mind include durability and flammability (as compared to materials like concrete and steel, that is).

The two planned high-rise buildings will contain engineered wood products like glued laminated timber (known as glulam), where pieces of wood are glued together under pressure with water-resistant adhesive, and cross-laminated timber, where flat boards are glued together in perpendicular layers. Fire performance tests on mass timber structures by the federal Alcohol, Tobacco, Firearms and Explosives (ATF) Fire Research Laboratory found that the materials not only met but exceeded building code requirements; though the wood will char on its outermost layer during a fire, it reportedly doesn’t burn through.

There are other issues to consider, including the poor sound insulation wood provides (due to its porousness) and how lightweight it is; the upper floors of the Mjostarnet tower in Norway had to be made from concrete to add weight to the building so it wouldn’t sway too much in high winds.

The 600-foot hybrid timber tower in Perth, called C6 (after the symbol for carbon on the periodic table), will reportedly be Australia’s first carbon-negative building. The project’s developer submitted its plans to the local council this week; if approved, the building will use 7,400 cubic meters of engineered timber for the build, all of which the developers claim can be regrown from just 580 seeds. The building will hold 245 apartments, as well as gardens and amenities for residents.

Rocket&Tigerli, as the Swiss all-timber building has been dubbed, will primarily consist of apartments, though it will also house retail shops, a bar, and a hotel. It’s expected to be done by 2026. “The project marks a milestone in the construction of timber buildings… because it introduces an innovative construction system that examines wood as a natural replacement for concrete,” the architect’s page reads.

This begs the question: how eco-friendly would it actually be for mass timber to become a popular material for tall buildings? Where will the wood used for construction be doing the most good for the environment—in the ground as a living tree, or in a beam as part of a high-rise? In an article from last week’s New Yorker about the tallest all-timber building in the world (the aforementioned Mjostarnet tower), writer Rebecca Mead points out that Norway invested heavily in forestation after World War II with the intention of expanding wood-based industries like paper manufacturing. But after discovering oil below the North Sea, the country understandably cast aside its paper-making ambitions in favor of mining the world’s most valuable commodity.

As a result, Mead wrote, Norway’s extensive pine and spruce forests just kept growing, and are now “ripe for industrial use.” If these trees were to die, they’d release all their sequestered carbon back into the atmosphere, whereas if they’re cut down and put in a building, that carbon stays trapped. But who’s to say how much longer the trees would live—and how much more carbon they’d draw down over that lifespan—if left in the ground? Pine trees can live for 100 to 1,000 years, with some variation between different species.

Though it’s widely known that construction (and, most specifically, concrete production) has a high environmental cost, those costs have mostly not been factored into decisions around building materials and methods for the last several decades. This will almost certainly change in the future, though, whether builders take it upon themselves to be more eco-friendly or regulations and public opinion force them to do so. Using more timber in high-rise buildings may end up being a viable solution in locations with dense, mature forests nearby—like Scandinavia, Canada, and Germany—but not as much in locations that don’t have tons of trees to spare or where lumber would need to be shipped across an ocean.

Nonetheless, it’s possible these two timber high-rises will be just the first of many, and our future city skylines could end up looking quite different than they do now.