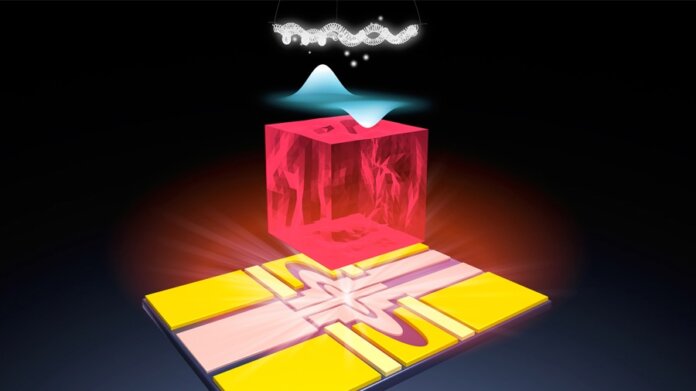 The digital world—your laptop, the internet it’s connected to, and the companies that make it all go—sits on a foundation of bits. These bits are the language digital computers speak.

Bits come in two flavors: Numerically, these two states are represented as ones and zeroes. On computer chips they’re made physical by miniature switches called transistors that are either on or off. Computer code combines physical and numerical bits into basic logical building blocks, like “yes” or “no” and “if” or “then.” String billions of bits together and you get spreadsheets, photos of your family, tweets, AI, and trillion-dollar companies.

Bits are the elemental particles of the digital age. But a new fundamental, and in some ways more powerful, unit of information is emerging: the qubit.

Qubits are the language of quantum computing and can take the value of ones and zeroes—like classical bits—or, thanks to the weird laws of quantum mechanics, a combination of the two simultaneously. This state, which is known as superposition, is where the magic happens. Qubits in superposition can explore many more possibilities than classical bits, and when their quantum states are linked together, or entangled, they can collaborate, in parallel, to solve immensely complex calculations in a blink. Future quantum computers won’t supplant classical computers, but in some instances, they’ll be able to solve  problems no classical computers can.

The current state of affairs, however, is a bit more complicated. While quantum computers have officially gone from theory to fact—a remarkable achievement—none are yet practical.

To realize a useful quantum computer, Google, IBM, Microsoft, Amazon, and others are pouring resources into machines that run on a menagerie of qubits. The most popular approach, favored by Google and IBM, involves tiny loops of superconducting wire. Honeywell and IonQ are pursuing atomic qubits made of trapped ions. Researchers in China are building intricate, Rube-Goldberg-like machines on lab benches to run quantum computations with mirrors and light.

The quantum race is anything but settled, and as outlined in a paper published this week in Nature, there’s a new horse on the track. Instead of superconducting loops, ions, or photons, a team of scientists led by the Department of Energy’s Argonne National Laboratory, made qubits from single electrons.

“Our ambitious goal is not to compete with those companies, but to discover and construct a fundamentally new qubit system that could lead to an ideal platform,” Dafei Jin, a scientist at Argonne and principal investigator for the project, said in a press release.

The team cooled neon gas down to near absolute zero, at which point it solidified. They then sprayed the surface of the solid neon with electrons from a light bulb filament. The electrons became trapped on the surface because neon is an inert (or non-reactive) element that attracts the electrons with a slight positive charge but also offers them nowhere to settle. Once trapped, the electrons can be moved with electrodes and have their states measured with a microwave resonator—another key advance outlined in the paper.

“The microwave resonator crucially provides a way to read out the state of the qubit,” said Kater Murch, physics professor at the Washington University in St. Louis and a senior co-author of the paper. “It concentrates the interaction between the qubit and microwave signal. This allows us to make measurements telling how well the qubit works.”

It’s not the first time scientists have tried to turn electrons into qubits. But prior attempts to trap the particles on the surface of helium in the 1990s proved too difficult. Helium is liquid even at low temperatures, and the sloshing around of the liquid disturbed the electrons. Neon ice, on the other hand, makes for a very stable home for an electron qubit.

The team says an ideal qubit needs to stay in superposition, or cohere, for more than a second, change states within a billionth of a second, and entangle with other qubits at scale. Measuring the properties of their electron qubits, they found the qubits maintain superposition for 220 nanoseconds and change states in mere nanoseconds. The performance is on par with existing state-of-the-art qubits under development for years.

They believe the simplicity of the system lends itself to low-cost fabrication, but scaling is uncertain. “I cannot say I have a clear answer,” Jin told IEEE Spectrum. “It is still a problem shared by all the qubit platforms. We may have some ways to do better than superconducting qubits, and close to as good as trapped ions. But it is not easy to achieve hundreds of qubits in the near term.”

Still, the scientists say they’ve only just begun perfecting the platform. They plan to further improve coherence by converting the electrons from charge qubits—which are based on an electron’s motion—to a more stable spin qubit and to entangle multiple qubits too.

In the big picture, though, the work is very early in development. IBM, by comparison, unveiled a quantum chip last year with 127 superconducting qubits and hopes to complete a chip with 433 qubits this year and another with 1,121 qubits in 2023. Meanwhile, trapped ion quantum computers have fewer qubits, but they’re already achieving higher fidelity.

Even so, it’s possible latecomers may leapfrog the competition. Superconducting qubits are finicky and will need thousand- or million-qubit chips for error correction. Which is why Microsoft is betting on a risky, still-hypothetical but, in theory, more scalable approach called a topological qubit. The quest has them years behind the competition, but they believe that, if successful, topological qubits could jump them ahead of the pack.

The truth is, despite some claims of imminent practicality, it’s unclear exactly where we stand on the timeline for really useful quantum computers.

“The immediate question is where quantum computing development, as it stands today, should be placed on that timeline,” Sankar Das Sarma, the director of the Condensed Matter Theory Center at the University of Maryland, recently wrote for MIT Technology Review. “Is it with the Wright brothers in 1903? The first jet planes around 1940? Or maybe we’re still way back in the early 16th century, with Leonardo da Vinci’s flying machine? I do not know. Neither does anybody else.”

So, although every company and research group passionately believes its approach will be the one to scale, it’s possible the killer qubit—maybe an electron on neon ice—is only just emerging or hasn’t been invented yet.

Image Credit: Illustration of new qubits made of a single electron on solid neon. Courtesy of Dafei Jin/Argonne National Laboratory