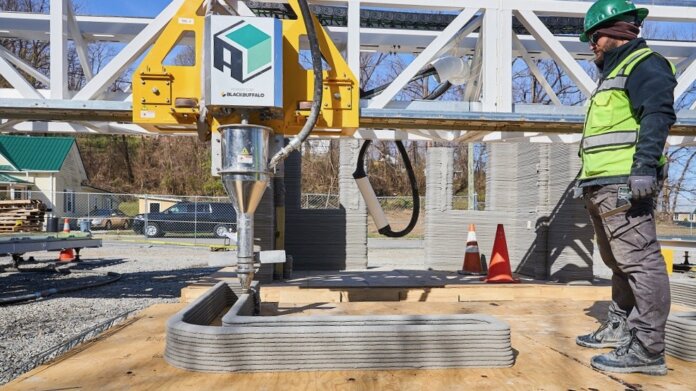 In late 2021, a 3D printed house went up in Williamsburg, Virginia. The printed portion of the three-bed two-bath home—that is, the exterior walls—took just 22 hours to complete. The house was a collaboration between Habitat for Humanity and Alquist 3D. The project’s success helped kick Alquist, a 3D printing construction company, into gear on an ambitious new effort launched this spring: to build 200 more 3D printed homes in Virginia within 5 years. The company claims it will be the biggest 3D printed construction project in the world.

Project Virginia, as it’s aptly been dubbed, launched in late April with two homes in Pulaski, a small town with 9,000 residents in the western part of the state. Alquist chose the town very intentionally; not only is it less than 30 minutes from Blacksburg, where Virginia Tech University is—generating demand for cheaper housing from students and faculty—but Pulaski itself is set to grow significantly over the next five years.

Volvo, Blue Star Manufacturing, and American Glove Innovations are all adding or expanding operations in the area and expect to create a total of 3,000 new jobs there as a result. Like too many other parts of the country, though, Pulaski doesn’t have enough housing supply to meet this coming growth in demand. According to Alquist’s website, less than 30 homes have been built in Pulaski in the past 5 years, and they’ve all sold for above market value.

Indeed, if you haven’t heard—which you undoubtedly have, unless you’ve been on a remote WiFi-less island for the last two years—America is in the midst of a serious housing crisis. In 2020, mortgage lender Freddie Mac put the shortage at 3.8 million homes. The problem is partially due to labor shortages, supply chain snarls, and raw material costs stemming from pandemic shutdowns, but also, things weren’t great on the housing front even before we ever heard of Covid (ah, those blessed days); demand for homes was outpacing supply in 2019.

The impact on high earners hasn’t been as hard, but middle- and low-income families are feeling the effect, as what’s really missing in most markets is an abundance of entry-level or starter homes.

Alquist hasn’t disclosed details about how much the Project Virginia homes will list for once they’re complete, but given that part of the company’s mission is to decrease the cost of homes and help solve the housing crisis, we’d hope to see prices at or perhaps even slightly below market value.

“With migration patterns shifting due to pandemic, climate, and economic concerns, smaller communities like Pulaski have a huge need—and an amazing opportunity—to develop affordable housing for new residents,” said Zachary Mannheimer, Alquist 3D’s founder and CEO. “By 3D printing these homes, Alquist and our partners will be accelerating Pulaski and Roanoke’s ability to harness current trends and attract new workers to this wonderful community in southwestern Virginia.”

Alquist’s printer of choice up until now has been a huge gantry-style machine made by Danish company COBOD. But they’re switching gears and employing Black Buffalo 3D’s NEXCON, which is also gantry-style and can create structures up to three stories tall. Its top speed (as per limitations set by OSHA on industrial robot systems) is 9.8 inches per second and 12 hours of continuous operation. Within these limits, NEXCON can supposedly build 1,000-square-foot structures in under 20 hours.

Given how fast the printer can lay down walls, five years actually seems like a long time to complete 200 homes. However, the company still has to do permitting, zoning, and utility work, and has not yet finalized the sites of all the planned homes.

Will 3D printing be the boon American housing needs? That remains to be seen, but Project Virginia is shaping up to be an excellent test case.