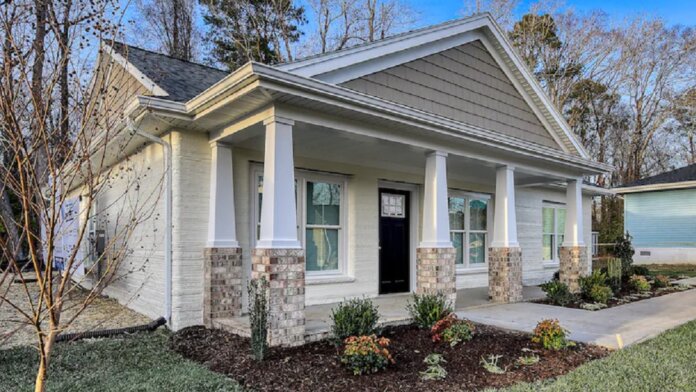 Over the last year home prices have skyrocketed (along with prices of almost everything else), leaving millions of people unable to afford to move or to change their housing situation. Mortgage lender Freddie Mac estimated last year that the US has a housing supply shortage of 3.8 million homes. It’s partly Covid-related; construction has slowed due to labor shortages, high raw material costs, and supply chain issues—but the problem predates the pandemic, as demand for homes was already outpacing supply in 2019.

Middle- and low-income families have been hit hardest by the housing shortage. In an effort to assist those in need, Habitat for Humanity launched an initiative last year to incorporate 3D printing into its construction process to cut costs. The first home was completed last month, and a family moved in just before Christmas.

Located in Williamsburg, Virginia, the house has three bedrooms and two bathrooms, and the 3D printed portion of it—that is, the exterior walls—took just 28 hours to build. “Build” in this case meant a 3D printer moved along a track in the shape of the house, putting down one layer after another of a cement mixture.

According to Janet Green, the CEO of Habitat for Humanity Peninsula and Greater Williamsburg, the house cost 15 percent less to build than wood-frame houses, and construction took just three months from start to finish (that includes putting in windows, hooking up electricity and plumbing, installing appliances, etc.).

Habitat for Humanity uses volunteer labor and some donated items to keep its construction costs low; the average building cost of its homes is around $110,000. The houses are sold at no profit with a zero-interest mortgage. Buyers must make 45 to 80 percent of the median income of the area their home is located in, have excellent credit, and put in 300 volunteer hours, whether by taking part in their own home’s construction or working at a Habitat for Humanity resale store. The Williamsburg home was purchased by a single mother with one son.

The home’s 3D printing portion was done by Alquist 3D, which aims to lower the cost of housing and infrastructure in economically distressed and under-served communities. Alquist uses a gantry-style 3D printer made by COBOD, a Danish company that also partnered with GE to 3D print the bases of 650-foot-tall wind turbines. Alquist uses a Raspberry Pi-based monitoring system in its home to track environmental data and enable smart building applications, like maximizing energy efficiency or monitoring security.

Here’s the coolest part: Alquist also installs a 3D printer in the kitchen of every home it builds, and homeowners can use the printer to make replaceable parts for their houses, from doorknobs to light switch covers. What would you choose, a built-in 3D printer or a built-in flatscreen TV? It’s a tough call, but I’d probably go with the printer just for the novelty, if nothing else (though most of us would probably use the TV a lot more, let’s be honest).

The Williamsburg home was Habitat for Humanity’s first to involve 3D printing, but it won’t be the last. Use of the technology for home construction is becoming more and more popular, with homes or entire 3D printed communities going up in California, New York, Texas, Mexico, and elsewhere.

“Our goal is to help solve the housing crisis in America,” said Alquist 3D founder Zack Mannheimer. “This is just the beginning. There will be many more.” A second house in Tempe, Arizona is nearly done, and a family is expected to move in in February.