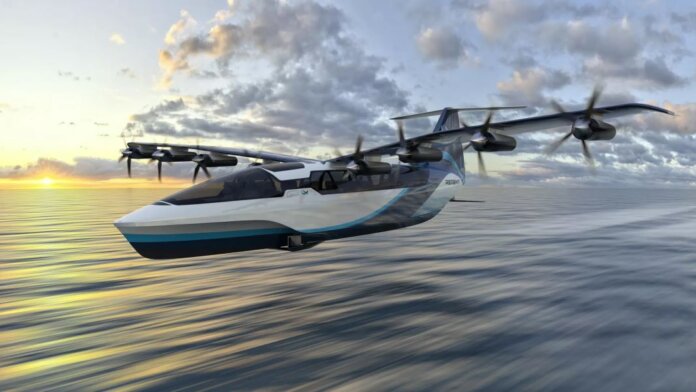 Electrifying aviation could help tackle the sector’s serious emissions problems, but battery-powered passenger jets are still some way off. All-electric seagliders that skim the waves like pelicans could hit the market much sooner, though.

Efforts are underway to wean aircraft off fossil fuels and onto electric propulsion, but batteries are still a long way from being able to go toe-to-toe with jet fuel. The problem is energy density; a little bit of kerosene goes a long way, but today’s leading lithium-ion batteries carry too much weight and not enough juice for the stringent requirements of the aviation sector.

At present, most startups in this space are working on electric vertical takeoff and landing (eVTOL) aircraft for short hops within or between cities. It’s likely to be the second half of the century before battery technology reaches the point where it’s able to power large commercial airliners.

But a novel seaplane design that harnesses a phenomena called “ground effect” to significantly boost flight efficiency could help accelerate the adoption of electric aviation. And its creator, Boston-based startup Regent Craft, recently partnered with Hawaiian carrier Mokulele Airlines to launch a regional flight network by 2025.

The company’s Viceroy seaglider is designed to fly just a few feet above the waves and is technically not a plane. Instead, it’s classified as a Wing in Ground Effect craft, or WIG, which refers to the novel quirk of physics it exploits.

When an aircraft flies close to a horizontal surface, it disrupts the airflow beneath the wings in such a way that the overall drag on the vehicle is reduced, boosting its fuel efficiency and speed. Over the years a number of designs have been proposed for planes that take advantage of this effect by skimming just above the more or less flat surface of the sea, most notably the Ekranoplans built by the Soviets during the Cold War.

The extra efficiency that comes from the ground effect will enable the Viceroy to go fully electric while still being able to carry 12 passengers roughly 180 miles at speeds of up to 180mph. Alternatively, it will be able to ferry up to 3,500 pounds of cargo.

It also has some novel design features that should help it sidestep some of the problems that have plagued previous WIGs. One major issue is that the transition between sitting in the water and getting airborne can be choppy, which is both uncomfortable for passengers and inefficient.

Regent’s design includes a hydrofoil, which will lift the vehicle out of the water once it crosses 20 miles per hour, allowing it to take off seamlessly. The foils will then be retracted once the vehicle is airborne to reduce drag. The Viceroy will also feature a host of digital controls that will automatically handle stability and altitude for a smoother ride.

Perhaps the most important factor, though, is that because WIGs are not classed as aircraft the regulations that govern them are far less onerous. That means that they don’t need to carry the kind of backup power that an aircraft would need for emergency landings, and they don’t need to be flown by trained airline pilots.

The company says that the aircraft should be able to operate from existing docks with fairly minimal extra infrastructure, such as charging stations. That makes them a promising solution for linking up coastal cities or island chains such as Hawaii. In addition to the partnership with Mokulele, Regent has partnered with Hawaiian Airlines to design a 100-seater seaglider called Monarch, which is slated to enter service by 2028.

Despite boasting $465 million in provisional orders though, the company doesn’t actually have a product yet. It is due to start testing a quarter-scale prototype of the Viceroy by the end of this year, but its goal of launching its first seaglider network by 2025 seems ambitious considering it is developing an entirely new kind of vehicle.

Even if the timelines slip, though, seagliders could prove a powerful avenue to accelerate the adoption of electric flight and reduce the considerable environmental impact of the aviation industry.