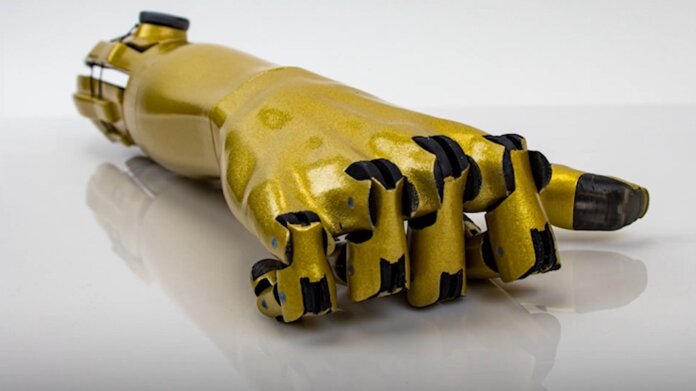 Two years ago, prosthetics startup Unlimited Tomorrow launched TrueLimb, its next-generation bionic arm. Six years of research and development went into TrueLimb, and the technology has given hundreds of people in the US an affordable, non-invasive way to replace lost limbs. Now, a new initiative is taking TrueLimb to a part of the world where many people need it: Ukraine.

We’ve all seen the footage and read the headlines about bombings and casualties. What’s not in the news as much is the life-altering injuries people are sustaining, many of them children. Getting custom, high-quality prosthetics to people in war zones would have been impossible just five or ten years ago, but digital technologies like 3D printing, scanning, and modeling mean the cost of prosthetics is falling and they can reach almost any part of the world.

Unlimited Tomorrow was founded in 2014 by now 25-year-old Easton LaChappelle, who’d been teaching himself robotics and building prosthetics since grade school. LaChappelle was presenting at the Colorado state science fair in 2012 when the robotic arm he’d built caught the attention of a young girl with a prosthetic arm. Talking to the child and her parents, LaChappelle learned the prosthetic had taken months to create, cost $80,000, and would be rendered essentially useless after the child went through her next growth spurt.

LaChappelle realized he had his work cut out for him, and he went all in on finding ways to more quickly make better, cheaper prosthetic arms. Less than 10 years later, he and his team have cut the cost to under $10,000 for prosthetics that are more responsive, lightweight, and adaptable, and can be custom-built without the wearer ever having to leave their home.

Here’s how it works. Unlimited Tomorrow sends people who apply for a prosthetic a 3D scanner, which they use to scan their residual limb. The company uses this data to design a set of test sockets (the component that connects the residual limb to the prosthetic), which are mailed to the wearer. The user tries on the different sockets and gives the company feedback about them during a video meeting, with the goal of finding the socket that’s most comfortable. The user selects their skin tone from a swatch with 450 options, then Unlimited Tomorrow 3D prints and assembles the custom prosthetic and tests it before shipping it out.

The socket, forearm, palm, and all the fingers are printed from durable PA12 nylon; only the electronics, batteries, sensors, and nuts and bolts aren’t 3D printed. An array of up to 36 sensors is embedded in the socket, each sensor calibrated to the wearer’s muscle sites; according to LaChappelle, the array picks up muscle movement at a higher resolution than the industry standard. The sensors read signals from nerves in the upper arm used to control motions like fingers bending, translating those signals into action.

The hands have independent finger joints and six adaptive grips, which conform to objects the wearer comes in contact with, and subtle vibrations serve as feedback to let the wearer know when their arm makes contact with something, mimicking a sense of touch.

Making a Difference in a Conflict Zone

As of mid-July, the UN estimated over 6,500 civilians had been injured in Ukraine, including hundreds of children. The Office of the High Commissioner for Human Rights believes the actual figures are much higher, as there are delays in information coming from conflict zones and many reports are still pending corroboration. The majority of the deaths and injuries reported are caused by explosive weapons with wide area effects, like shelling from heavy artillery, launch rocket systems, and missile and air strikes.

Among the wounded are many who have lost limbs in explosions. Unlimited Tomorrow has partnered with Singularity Group to raise $1 million to give amputee victims access to prosthetic arms. At a cost of $10,000 apiece, the initiative aims to deliver prosthetics to 100 wounded Ukrainians. The companies launched a GoFundMe campaign earlier this month.

The initiative is a testament to how technology can democratize access to solutions for all kinds of problems, from medication to food, shelter, and clothing. If high-quality prosthetic arms can be brought to a war zone, that means other people in need all over the world can access them too. Raising a million dollars to help a hundred people is doable; if prosthetics still cost $100,000 apiece, it would be a different story.

Despite the progress that companies like Unlimited Tomorrow have made, there’s work yet to be done. How can costs be driven down and accessibility improved even further? For children especially, as they grow, more than one prosthetic will likely be needed in relatively short order. And what might prosthetic technology look like in five or ten years? Rather than having limbs made at a production facility and shipped out, maybe prosthetic wearers will be able to access 3D printers locally to make replacement parts (or even entire arms) themselves. Maybe a more durable, lower-cost material will come onto the scene, and improvements in robotics and AI will make arms more functional.

Whatever the next steps, this and other technologies that can be used for humanitarian aims have room to grow, and initiatives like Prosthetic Arms for Ukraine show it’s worth the effort.