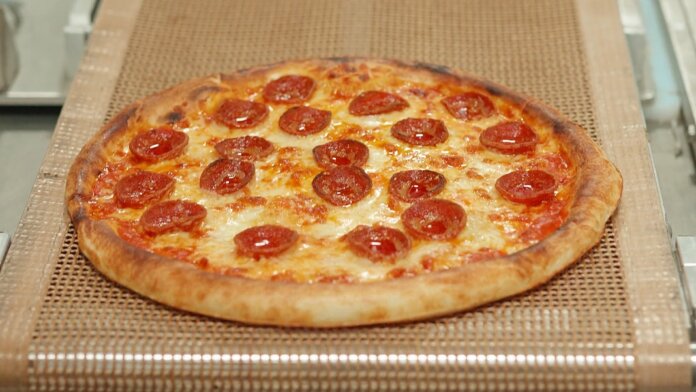 Who doesn’t love hot, gooey, fresh-out-of-the-oven pizza? If there’s a better food in existence, I for one don’t know about it (though ice cream is a pretty close contender). Americans have loved pizza for decades, but the Covid-19 pandemic brought our consumption of this glorious delicacy to new heights; according to Pizza Magazine’s 2022 Pizza Power Report, (yes, there’s actually a publication called Pizza Magazine! Who knew!), American consumers accounted for about a third of global spending on pizza, shelling out $45 billion for cheese-covered pies in 2021.

Worth it? Taste buds and waistlines may not be in agreement, but we can probably say yes.

A Los Angeles-based startup called Stellar Pizza is hoping to make pizza consumption even easier for LA residents by bringing them fresher, faster, cheaper pies. A few key factors set this particular startup apart, starting with the fact that it’s run by former SpaceX engineers; if you can design components for rockets, surely designing a pizza-making robot is a piece of cake. Or rather, a piece of pie.

Stellar’s cooking system is not only fully automated, it will make pizzas on a truck while said truck is en route to delivery sites—talk about fresh. Last but not least, the pizzas reportedly take just 45 seconds to bake, and depending on topping choices, cost $7 to $10.

The only remaining question is, are they any good?

To the company’s credit, it hired pizza consultant (I KNOW—that’s a job?!) Noel Brohner, who has worked with companies like Google and Mod Pizza to fine-tune their recipes, as well as with elite LA chefs and celebrities to perfect pizzas served in restaurants and those made at home. Brohner told the Los Angeles Times that when he tried Stellar’s initial recipe, “I was really impressed, and kind of shocked that a couple of rocket engineers could do so well for themselves even before I got brought in.”

So how much better might Stellar’s pizzas be after incorporating the guru’s feedback?

The process to make them isn’t terribly different from that of pizzas made by human hands; first, a metallic arm lowers into a refrigerated box and grabs a ball of dough, depositing it onto a conveyor belt, where a disc lowers to press it into a 12-inch circle (the company makes the dough at its headquarters then loads it into the machine’s refrigerator in pre-portioned balls). As the raw crust moves along on the belt, various machines dot it with tomato sauce, shake cheese onto it, add other toppings, then lift it into a 900-degree oven for baking. The pie’s journey is tracked by cameras and sensors, which can make adjustments as needed.

We’re all really hoping not to see another pandemic in our lifetimes, but Stellar says one selling point of its pies is that no human hands touch them; they’re made entirely by machines, all the way through to being slid into a box, which a delivery driver passes on to customers.

The company is currently raising funds to build a fleet of pizza robots, which it plans to take to customer-dense areas like stadiums and college campuses. Customers will use the company’s app to place orders.

Stellar isn’t the first startup to try to automate pizza-making, but maybe it will be the first to succeed; its predecessors haven’t fared all that well. Basil Street Cafe installed 12 pizza-cooking vending machines around LA before going out of business a couple months ago, and Mountain View-based Zume Pizza shut its doors and pivoted to making packaging materials after a couple years of cranking out robot-made pies (losing a lot of money in the process).

Given the inflation and labor shortages we’ll likely be dealing with for the foreseeable future, incorporating more robots into food service seems like not only a good idea, but a necessary one, especially if it helps make food more affordable. Of Stellar’s technology, Brohner said, “Instead of having a labor cost close to 20, 30, even 40 percent, it’s closer to 10 percent. So what they’re able to do is use much higher-quality ingredients while keeping costs competitive.”

Stellar Pizza plans to launch in LA this fall.