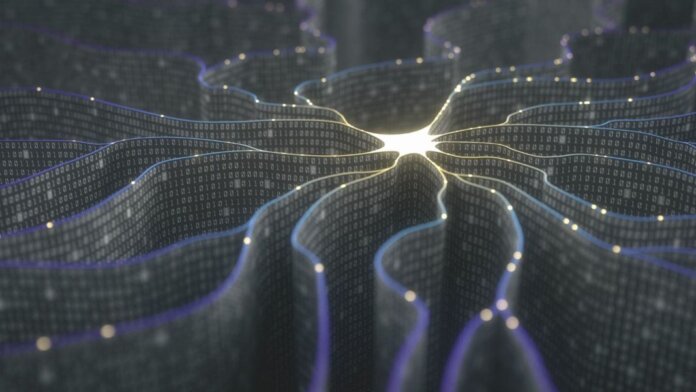 The translucent chip attached to the mouse’s leg looked nothing like a neuron. Dotted with a series of sensors and channels and smaller than a human finger, it looked—and flexed—like a Band-Aid. Yet when doused with dopamine, the chip worked its magic. The mouse’s leg began to twitch and stretch. Depending on the dose of dopamine, the chip controlled the limb like a marionette.

The chip is an artificial neuron, but nothing like previous chips built to mimic the brain’s electrical signals. Rather, it adopts and adapts the brain’s other communication channel: chemicals.

Called neurotransmitters, these chemicals are the brain’s “natural language,” said Dr. Benhui Hu at Nanjing Medical University in China. An artificial neuron using a chemical language could, in theory, easily tap into neural circuits—to pilot a mouse’s leg, for example, or build an entirely new family of brain-controlled prosthetics or neural implants.

A new study led by Hu and Dr. Xiaodong Chen at Nanyang Technological University, Singapore, took a lengthy stride towards seamlessly connecting artificial and biological neurons into a semi-living circuit. Powered by dopamine, the setup wasn’t a simple one-way call where one component activated another. Rather, the artificial neuron formed a loop with multiple biological counterparts, pulsing out dopamine while receiving feedback to change its own behavior.

In a way, the system acts like an interneuron, which serves as a decision-maker in the brain to fine-tune neural circuits. “A large portion of intelligent information—including memory and emotion—are encoded in or conveyed by chemical molecules like neurotransmitters, and we wanted to build an artificial neuron that mimics how a real neuron communicates,” said the authors.

The Other Side of the Story

You’ve heard this classic tale of neural networks. A neuron receives an electrical zap, which travels down its tortuous branches. If the signal is sufficiently strong, it’ll activate—or depress—the next neuron, wiring up the two into a network. This neuroscience dogma, popularized as “neurons that fire together, wire together,” is the basis of many neuromorphic chips built to reverse engineer this electrical quirk for low-energy and high-efficiency computation.

The data or “memory” of these activities is stored at synapses. I like to imagine these intricate structures as two river banks with a stream flowing between them. One bank is part of the neuron sending signals, the other is part of the receiving neuron.

Enter neurotransmitters. Once a neuron integrates its receiving electrical signals, the pulses travel down the branches until they reach a synapse. Here, the signals instruct dozens of parked “boats”—picture little soap bubbles—each filled with neurotransmitters, to launch towards the other bank. Once docked, the chemicals unload from the boats to trigger another electrical signal in the downstream neuron. And the cycle continues to link up the brain’s intricate networks.

A Work of Art

The new study reintroduced chemical reasoning into artificial neurons. Sifting through a whole slew of potential neurotransmitter candidates, the team honed in on dopamine—a multitasker that drives motivation, encodes reward, and controls movement—as the star of the artificial neuron.

The chip contains three main components that mimic a real neuron: it senses dopamine, encodes the resulting signal inside a “synapse,” and releases dopamine to its neighbor.

The first part is an electrochemical sensor that can detect dopamine at biological levels. Made out of carbon nanotubes with a dose of graphene oxide sprinkled in, the nanostructure is especially efficient at picking up tiny bits of dopamine in its environment, even with other biological chemicals muddying the waters.

Once detected, the data is transmitted to the next component—a memristor—as an electrical pulse. Like a synapse, a memristor has a built-in ability to change its resistance depending on previous activity—that is, it has a “memory.” The higher the resistance, the less it can send electrical signals onward.

The device may sound exotic, but picture a (very expensive) cheese sandwich. The two pieces of bread are made of silver and gold nanoparticles, and the “cheese” is a silk protein that tunes the memristor’s resistance. It’s a neat setup: the component can both support short- and long-term changes in the “synapse,” mimicking memories that rapidly slip your mind or those etched into the brain.

It’s a sign of learning. “This means that the system has formed a stronger connection with repeated stimuli and will be more sensitive to familiar stimuli compared with fresh ones,” the authors said.

Then comes the really cool part. Depending on its resistance, the memristor can heat up a hydrogel so that it releases dopamine into pre-etched nanochannels.

Putting everything together, the chip acts like a biological neuron. When stimulated with dopamine, it generates an electrical signal that’s encoded at the “synapse.” If the signal is sufficiently strong, it’ll pump out dopamine onto its neighbors.

What’s left to do? Test it out with living neurons.

As a first sanity check, the team placed the chip inside a Petri dish of cells with the ability to release dopamine, dubbed PC12.

Mimicking how neurons activate, they pumped in a salty mix that triggered the cells to release dopamine. Startled “awake” from the sudden influx, the artificial neuron spiked with activity, in turn pumping out its own dose of dopamine to its PC12 neighbors. Once bathed with dopamine, the biological cells changed their electrical current in response (none the wiser that the chemical came from an artificial neuron).

This type of neural chitchat is similar to interneurons. As their name suggests, these neurons act like rungs on a ladder, hooking up neural networks and helping refine the circuits’ activity. Here, the artificial neuron behaved as an interneuron—a “traffic controller” of sorts that shapes neural networks and keeps their activity in line.

Going a step further, the team next tethered the chip to a nerve in a mouse’s leg. Depending on the level of dopamine, the leg flexed as if in a morning stretch, spreading wider as the chemical increased on the chip. In another proof of concept, the team hooked up the chip to a robotic hand. By jiggering the amount of dopamine on the chip, the team could control the robot in a chemically-induced “handshake”—a downward flicker of the mechanical wrist, solely powered by dopamine.

The difference here is the ability for feedback: the new setup forms a loop with neurons, capable of receiving and releasing dopamine, all the while changing the “memory” of the network. For now, the artificial neuron acts more as a “messenger bridge” capable of transmitting information. The setup is still too bulky for brain implants, although the authors are working to shrink each component and reduce energy consumption.

To the authors, chemical and electrical neuromorphic chips aren’t one or the other. After all, the brain isn’t either.

“Such chemical BMIs [brain-machine interfaces] could complement electrical BMIs, potentially allowing neuronal information to be correctly and comprehensively interpreted for use in neuroprosthetics, human–machine interactions, and cyborg construction,” the authors said.