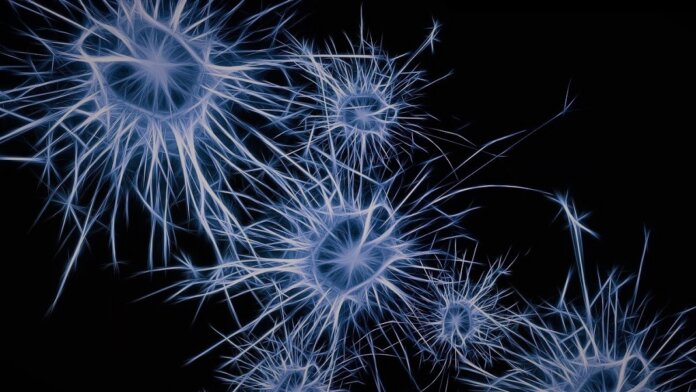 It sounds crazy, but a new study in Nature Materials shows that it’s possible to get an artificial neuron to communicate directly with a biological one using not just electricity, but dopamine—a chemical the brain naturally uses to change how neural circuits behave, most known for signaling reward.

Because these chemicals, known as “neurotransmitters,” are how biological neurons functionally link up in the brain, the study is a dramatic demonstration that it’s possible to connect artificial components with biological brain cells into a functional circuit.

The team isn’t the first to pursue hybrid neural circuits. Previously, a different team hooked up two silicon-based artificial neurons with a biological one into a circuit using electrical protocols alone. Although a powerful demonstration of hybrid computing, the study relied on only one-half of the brain’s computational ability: electrical computing.

The new study now tackles the other half: chemical computing. It adds a layer of compatibility that lays the groundwork not just for brain-inspired computers, but also for brain-machine interfaces and—perhaps—a sort of “cyborg” future. After all, if your brain can’t tell the difference between an artificial neuron and your own, could you? And even if you did, would you care?

Of course, that scenario is far in the future—if ever. For now, the team, led by Dr. Alberto Salleo, professor of materials science and engineering at Stanford University, collectively breathed a sigh of relief that the hybrid circuit worked.

“It’s a demonstration that this communication melding chemistry and electricity is possible,” said Salleo. “You could say it’s a first step toward a brain-machine interface, but it’s a tiny, tiny very first step.”

The study grew from years of work into neuromorphic computing, or data processing inspired by the brain.

The blue-sky idea was inspired by the brain’s massive parallel computing capabilities, along with vast energy savings. By mimicking these properties, scientists reasoned, we could potentially turbo-charge computing. Neuromorphic devices basically embody artificial neural networks in physical form—wouldn’t hardware that mimics how the brain processes information be even more efficient and powerful?

These explorations led to novel neuromorphic chips, or artificial neurons that “fire” like biological ones. Additional work found that it’s possible to link these chips up into powerful circuits that run deep learning with ease, with bioengineered communication nodes called artificial synapses.

As a potential computing hardware replacement, these systems have proven to be incredibly promising. Yet scientists soon wondered: given their similarity to biological brains, can we use them as “replacement parts” for brains that suffer from traumatic injuries, aging, or degeneration? Can we hook up neuromorphic components to the brain to restore its capabilities?

But there’s a huge problem: current brain-machine interfaces only use electrical signals to mimic neural computation. The brain, in contrast, has two tricks up its sleeve: electricity and chemicals, or electrochemical.

Within a neuron, electricity travels up its incoming branches, through the bulbous body, then down the output branches. When electrical signals reach the neuron’s outgoing “piers,” dotted along the output branch, however, they hit a snag. A small gap exists between neurons, so to get to the other side, the electrical signals generally need to be converted into little bubble ships, packed with chemicals, and set sail to the other neuronal shore.

In other words, without chemical signals, the brain can’t function normally. These neurotransmitters don’t just passively carry information. Dopamine, for example, can dramatically change how a neural circuit functions. For an artificial-biological hybrid neural system, the absence of chemistry is like nixing international cargo vessels and only sticking with land-based trains and highways.

“To emulate biological synaptic behavior, the connectivity of the neuromorphic device must be dynamically regulated by the local neurotransmitter activity,” the team said.

The new study started with two neurons: the upstream, an immortalized biological cell that releases dopamine; and the downstream, an artificial neuron that the team previously introduced in 2017, made of a mix of biocompatible and electrical-conducting materials.

Rather than the classic neuron shape, picture more of a sandwich with a chunk bitten out in the middle (yup, I’m totally serious). Each of the remaining parts of the sandwich is a soft electrode, made of biological polymers. The “bitten out” part has a conductive solution that can pass on electrical signals.

The biological cell sits close to the first electrode. When activated, it dumps out boats of dopamine, which drift to the electrode and chemically react with it—mimicking the process of dopamine docking onto a biological neuron. This, in turn, generates a current that’s passed on to the second electrode through the conductive solution channel. When this current reaches the second electrode, it changes the electrode’s conductance—that is, how well it can pass on electrical information. This second step is analogous to docked dopamine “ships” changing how likely it is that a biological neuron will fire in the future.

In other words, dopamine release from the biological neuron interacts with the artificial one, so that the chemicals change how the downstream neuron behaves in a somewhat lasting way—a loose mimic of what happens inside the brain during learning.

But that’s not all. Chemical signaling is especially powerful in the brain because it’s flexible. Dopamine, for example, only grabs onto the downstream neurons for a bit before it returns back to its upstream neuron—that is, recycled or destroyed. This means that its effect is temporary, giving the neural circuit breathing room to readjust its activity.

The Stanford team also tried reconstructing this quirk in their hybrid circuit. They crafted a microfluidic channel that shuttles both dopamine and its byproduct away from the artificial neurons after they’ve done their job for recycling.

Putting It All Together

After confirming that biological cells can survive happily on top of the artificial one, the team performed a few tests to see if the hybrid circuit could “learn.”

They used electrical methods to first activate the biological dopamine neuron, and watched the artificial one. Before the experiment, the team wasn’t quite sure what to expect. Theoretically, it made sense that dopamine would change the artificial neuron’s conductance, similar to learning. But “it was hard to know whether we’d achieve the outcome we predicted on paper until we saw it happen in the lab,” said study author Scott Keene.

On the first try, however, the team found that the burst of chemical signaling was able to change the artificial neuron’s conductance long-term, similar to the neuroscience dogma “neurons that fire together, wire together.” Activating the upstream biological neuron with chemicals also changed the artificial neuron’s conductance in a way that mimicked learning.

“That’s when we realized the potential this has for emulating the long-term learning process of a synapse,” said Keene.

Visualizing under an electron microscope, the team found that, similar to its biological counterpart, the hybrid synapse was able to efficiently recycle dopamine with timescales similar to the brain after some calibration. By playing with how much dopamine accumulates at the artificial neuron, the team found that they loosely mimic a learning rule called spike learning—a darling of machine learning inspired by the brain’s computation.

Unfortunately for cyborg enthusiasts, the work is still in its infancy.

For one, the artificial neurons are still rather bulky compared to biological ones. This means that they can’t capture and translate information from a single “boat” of dopamine. It’s also unclear if, and how, a hybrid synapse can work inside a living brain. Given the billions of synapses firing away in our heads, it’ll be a challenge to find-and-replace those that need replacement, and be able to control our memories and behaviors similar to natural ones.

“The neurotransmitter-mediated neuromorphic device presented in this work constitutes a fundamental building block for artificial neural networks that can be directly modulated based on biological feedback from live neurons,” the authors concluded. “[It] is a crucial first step in realizing next-generation adaptive biohybrid interfaces.”