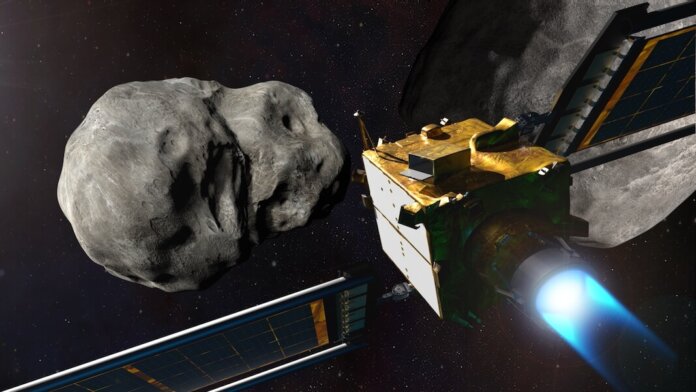 Today, September 26, a spacecraft moving eight times faster than a speeding bullet will impact an asteroid almost 7 million miles (11 million kilometers) from Earth. To be clear, the asteroid poses no threat to us, either before or after impact. But no one knows exactly how the collision will affect the system otherwise. What scientists learn may just save the world.

The theory is that if astronomers discover an asteroid bound for Earth, we can send a spacecraft, or “kinetic impactor,” to nudge it off its path. With enough advance warning, the nudge wouldn’t have to be much for a would-be impactor to miss Earth entirely.

The Double Asteroid Redirection Test (DART) spacecraft was designed by NASA and launched on a SpaceX rocket last November. After nearly a year traversing the void, DART will finally arrive at a pair of asteroids, Didymos and Dimorphos. The latter of the two asteroids, a moonlet orbiting the larger Didymos, is DART’s primary target.

The spacecraft itself is basically a bus-sized, guided projectile with a GoPro. Its payload consists of just one instrument: A high-resolution camera called DRACO.

The camera will livestream images back to Earth at a rate of one image per second. Four hours before impact, when the larger asteroid Didymos will still be but a pixel of light in those images, DART will go on autopilot. The communications delay will be too much for scientists back home to take the controls. About two minutes from impact, DART’s primary target, Dimorphos, will fill the camera’s field of view. It will grow and grow until…the screen goes black. That blank screen will signify the first time humanity has altered the trajectory of a celestial body. (There’s also a chance DART will miss, in which case mission scientists will try to figure out what happened and possibly look for another target.)

[UPDATE: The DART mission went off without a hitch. You can still watch the whole broadcast or just DART’s final seconds below.]

The details of the impact will give us invaluable data for future planning.

Scientists expect DART to change Dimorphos’ 12-hour orbit by a few minutes. What will happen to Dimorphos itself is an open question. Last year, University of Maryland simulations suggested that, depending on its shape and where DART strikes, there’s a decent chance Dimorphos will eventually begin to tumble chaotically in its orbit.

Scientists will be watching to find out.

DART recently deployed a second, smaller spacecraft about the size of a shoebox. The craft, called LICIACube, will record images of the impact from an orbit of about 55 kilometers above Dimorphos. Ground-based telescopes on Earth and the Hubble and James Webb Space Telescopes will also observe the aftermath. And a future European Space Agency mission, Hera, will go in for a more detailed investigation.

The first and most crucial observation will be a measurement of how Dimorphos’ orbit around Didymos changes after impact. Scientists are hoping to see the length of its orbit change by at least 73 seconds to prove DART was sufficiently powerful. Hera’s observations will add more data about the asteroid’s composition. Taken together, scientists can be more confident in their calculations should we discover an asteroid headed our way.

“If you just take a hair off the orbital velocity, you’ve changed the orbit of the asteroid so that what would have been impact three or four years down the road is now a complete miss,” Lindley Johnson, planetary defense officer at NASA, told IEEE Spectrum.

Time, then, is our greatest ally in planetary defense. That makes completing a survey of all asteroids in our neighborhood just as important as studying ways to deflect them.

To date, astronomers have discovered over 90 percent of all near-Earth asteroids greater than 0.6 miles (1 kilometer) across. These are impactors in the range of the one that wiped out the dinosaurs. We’ve discovered only about 40 percent of asteroids bigger than 460 feet (140 meters). This class wouldn’t wipe us out, but would do extreme damage if one hit a populated area. In any given year the likelihood of a surprise impact is small, but the devastation could be significant should an asteroid strike without warning.

Today’s experiment and subsequent observations will begin to give scientists the data they need to make realistic defense plans in the future. Instead of missions manned by Bruce Willis, Ben Affleck, and a few nuclear warheads, maybe all we’ll need is a small spacecraft packing just enough punch to give dangerous space rocks a nudge.