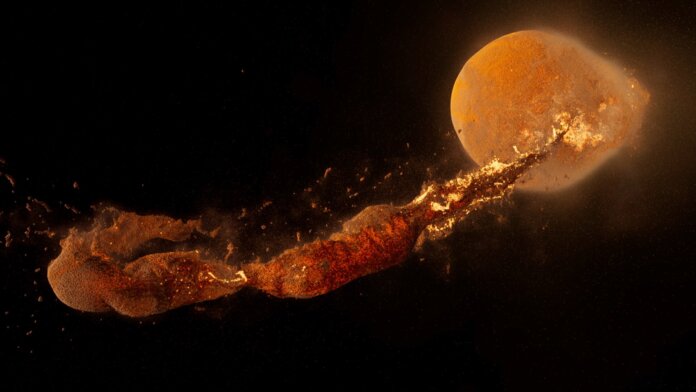 Cast your mind back to when Earth was a baby. The solar system was a brutal nursery. Giant fragments of rock whirled chaotically around a fiery young sun, regularly bombarding infant planets. Earth formed during this period, aptly called the Hadean, and without this steady rain of fire building up the bones of our planet, we wouldn’t be here at all.

And neither would the moon.

Towards the end of this period, about 4.5 billion years ago, a Mars-sized protoplanet called Theia smacked into Earth in a collision thought to have released 100 million times more energy than the asteroid that ended the dinosaurs. The impact destroyed Theia, threw a titanic plume of material into orbit—and gave birth to our moon.

This giant impact scenario is the leading theory for how the moon formed because it fits much of what we observe about the Earth and moon today. But scientists are still debating the details. Early simulations of the impact, for example, suggested the moon would be mostly made of material from Theia, but analysis of lunar rocks shows the geochemical composition of the Earth and moon is nearly identical.

Now, however, a new high-resolution simulation, described in a recent paper by NASA Ames scientists and researchers at Durham University, may help resolve the discrepancy.

According to the paper, the outcomes across a number of possible impact scenarios more closely match observations, including the moon’s orbit and composition. But perhaps most surprisingly, where prior work suggested the moon’s formation would have taken months or years, the new simulation suggests our satellite formed and was slingshotted into orbit in mere hours.

In the simulation, shown in the video below, Theia strikes Earth with a glancing blow. An arc of material, originating from both Theia and Earth, whips into orbit and forms two bodies. The larger of these, doomed to fall back to Earth, launches the smaller one, the moon, into a stable orbit. If the initial collision took place at midnight, the moon would have formed by breakfast.

This isn’t the first attempt at better fitting our observations to the moon’s giant impact origin story.

Scientists have proposed and simulated a number of theories to explain the moon’s geochemical composition. These include higher energy or multiple impacts, a hit-and-run, or the possibility of an earlier impact, when Earth was still covered by an ocean of magma. These are still possible, though each comes with its own set of challenges too.

Here, the team took a different approach, suggesting that perhaps the problem isn’t the theory but our simulation of it. Older simulations used hundreds of thousands or millions of “particles”—you can think of these as idealized digital stand-ins for chunks of Earth and Theia, each following the laws of physics in the collision. The latest simulation, on the other hand, uses hundreds of millions of particles, each about 8.5 miles (14 kilometers) across.

It’s the highest resolution digital recreation of the moon’s formation yet.

The resolution brought the mechanics of large impacts into focus in a way prior, less detailed simulations simply couldn’t. And in the process, the work threw a new, potentially simpler theory into the hat: That the moon formed rapidly, in just one step. The team found this scenario could produce a moon much like ours, from orbit to composition.

However, while the new work is enticing, further reinforcing it will require more high-resolution simulations and, crucially, future missions collecting more samples from the moon itself.

Whatever scientists find, the story of the moon’s formation has far-reaching implications. Its fate is tied closely to Earth’s, from tides to plate tectonics and the rise and evolution of life itself. If we find our moon is an outlier—as it seems to be in our solar system, at least—perhaps the chances that life arises and survives the long haul elsewhere are lower. We just don’t know yet.

That’s why it’s important to build and study simulations like this one.

“The more we learn about how the moon came to be, the more we discover about the evolution of our own Earth,” said Vincent Eke, a researcher at Durham University and a co-author on the paper, in a statement. “Their histories are intertwined—and could be echoed in the stories of other planets changed by similar or very different collisions.”