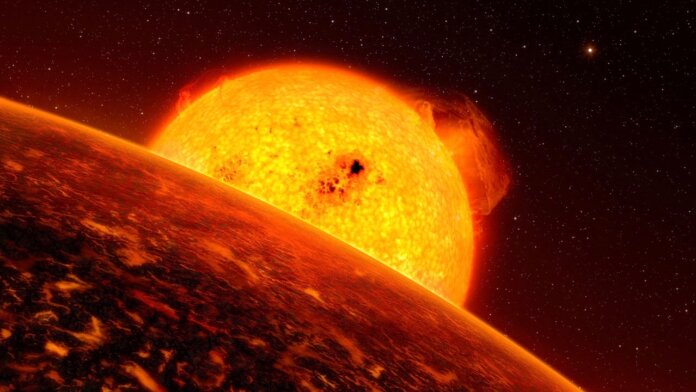 Our planet’s history is written in its rocks. You can traverse eons by brushing your fingers over the layers of a cliff wall. But beyond a certain point, the record goes blank. Though the Earth is roughly 4.5 billion years old, the oldest-known rocks date back to only around 4 billion years ago. The relentless motions of Earth’s tectonic plates have recycled its surface.

Still, chemical clues can take us further back in time to when young Earth was a lava planet. Scientists believe a series of mammoth impacts—the last of which formed the moon—liquified the surface and formed planet-wide magma oceans hundreds of miles deep. The rocks from this fiery era are long gone, but their ghost lives on.

As the magma oceans gradually cooled and crystallized into rock, the planet we know—its internal structure, surface, and atmosphere—began to take form. Understanding this phase can help explain how Earth evolved from a hell-planet to the cradle of life.

But it’s no easy task.

“There are few opportunities to get geological constraints on the events in the first billion years of Earth’s history. It’s astonishing that we can even hold these rocks in our hands—let alone get so much detail about the early history of our planet,” said lead author Dr. Helen Williams, from Cambridge’s Department of Earth Sciences.

As the Earth cooled and crystalized, scientists believe dense chunks of newly solidified crystals sank deep into the Earth’s lower mantle, near the core of the planet. It’s thought they may even exist today in “ancient crystal graveyards” forever beyond our reach.

It was this theory the Cambridge team went looking to prove.

“The driving question that motivated me was, if we think the magma ocean stage was important to the Earth’s history, why is there no geological evidence for it?” Williams told Gizmodo. “What if we actually tried to directly hunt for it?”

The rocks hail from Greenland’s Isua supercrustal belt. The basalt there—a kind of volcanic rock—is famous for being the oldest on Earth, yielding up evidence for the earliest life on our planet, early plate tectonics, and now, it appears, an even more ancient era.

“It was a combination of some new chemical analyses we did and the previously published data that flagged to us that the Isua rocks might contain traces of ancient material,” said co-author Dr. Hanika Rizo of Carleton University.

Using forensic chemical analysis and thermodynamic modeling, the team traced the Greenland rocks’ origins and their path to the surface.

When rock heats up in the planet’s interior it begins to rise through the mantle, eventually emerging in volcanic events. Isotopes in the rock can act as a record of its journey, a bit like stamps in a passport. In this case, the scientists found the stamp of unique iron isotopes likely formed in an extremely high-pressure homeland some 430 miles below the surface—a region scientists also expect houses those magma ocean “crystal graveyards.”

“Those samples with the iron fingerprint also have a tungsten anomaly—a signature of Earth’s formation—which makes us think that their origin can be traced back to these primeval crystals,” Williams said.

Further study of their chemistry revealed a tortuous journey that included several phases of cooling, crystalizing, heating, and remelting.

Yet, despite their transformation by events in the interior, Williams wrote in a Conversation article on the study that “the rocks that emerged, located in present-day Greenland, still retain chemical signatures that connect them to Earth’s magma-covered past.”

A Story Still Being Read

While discovering a new geosignature of Earth’s ancient past is an exciting step, there’s plenty more work to do. How long did magma oceans last on the planet, for example, and how much of the planet did they cover? Now that we know what to look for, Williams says we might search other volcanic hotspots in Hawaii or Iceland.

It’s a painstaking investigation, but bit by bit, the Earth’s early history is being laid bare. Its long-held secrets may help us explain how the planet we know today, one so well suited for living things, formed out of the cauldron of the early solar system.

The more we know about our own planet’s history, the more we’ll understand how it and other planets form and, by extension, how life began here—and, perhaps, elsewhere too.