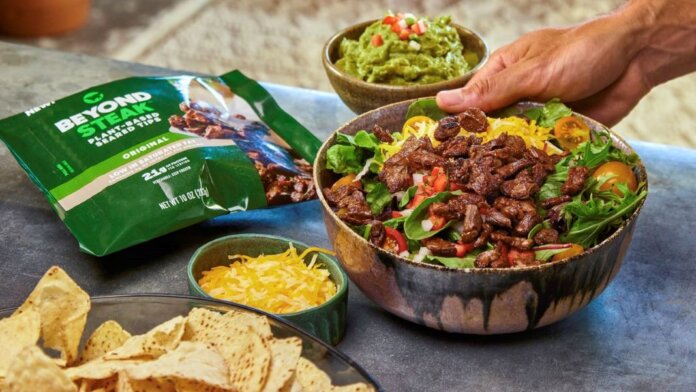 Beyond Meat has been selling plant-based imitation meat since 2012, with an ever-growing list of products including burgers, ground meat, sausage, meatballs, jerky, and chicken. This week the company added one more to the list: steak. Their plant-based steak tips are the first product of its kind to hit the market.

The big differentiator between existing plant-based meat and the new steak product is the technology used to make it. Most plant-based meat uses the “chop and form” processing method, where the protein particles making up the bulk of the meat are mixed with binding agents then formed into a given shape, like nuggets or burgers. Since the texture of foods made with ground meat doesn’t need to be too specific, this is a fairly easy task.

Beyond Meat used “whole muscle” technology to make its steak tips. This processing method needs to mimic cuts of meat that contain multiple textures; a steak from a cow, for example, would have ribbons of fat running through it, and they wouldn’t be distributed quite evenly. Turning plant protein into something that even half-convincingly mimics these characteristics is pretty complicated. The steak tips use fava bean protein and wheat gluten as their base ingredients.

Beyond Steak launched this past Monday at more than 5,000 grocery stores all over the country, including Kroger, Walmart, Jewel, and Sprouts, among others. A 10-ounce package is priced at $7.99.

The two big questions are, is it good? And, how similar is it to the real thing?

It seems context and expectations can both be a swaying factor in consumers’ opinions. One Vox editor said, “This is uncanny. My parents are from Nebraska, where they have a lot of beef, and I have a pretty high bar. Steak feels like the one thing I would never want to go artificial on…but my initial thoughts are very pro—they’ve done a good job with this.” Others, meanwhile, felt it was a lot more obvious that they weren’t eating real meat.

What about the nutritional side of the equation? Many consumers see plant-based meat as being healthier than real meat, but it depends which parts of the recommended daily diet you look at; fake and real meat products tend to have comparable amounts of protein, while real meat has more saturated fat and fake meat can have more sodium (though these both depend on the type of meat and processing). Beyond Steak contains 21 grams of protein and 6 grams of fat per serving.

Though plant-based meat hasn’t been around for all that long, at the moment it seems like its heyday has passed. “Sales are slowing following the market’s pandemic-driven growth in 2020, as initial trial of [plant-based meat alternatives] has not translated to sustained category engagement,” said Caleb Bryant, associate director of food and drink reports at market research company Mintel.

At its peak in July 2019, Beyond Meat was valued at $13.4 billion, but the company’s shares plummeted by 80 percent this year, leaving its value at a comparatively paltry $821 million.

The company also disclosed plans earlier this month to lay off 19 percent of its workforce, or 200 employees.

Factors behind the slump could include inflation (people may be opting for cheaper substitutes as their grocery bills have ballooned) and the novelty factor: many consumers may have been curious to try plant-based meat just to see what it was like, but didn’t integrate it into their regular list of staple foods.

As the first to bring a plant-based steak product to market, Beyond Meat is ahead of its peers, but competitor Impossible Foods is right on its heels: at MIT Technology Review’s ClimateTech conference earlier this month, the company’s founder said they have a filet mignon-like product in the works.

Despite the dip in popularity it’s seeing right now, plant-based meat could very well have a bright future. As consumers become more environmentally conscious, some could choose to forgo real meat more often, and will need comparable substitutes. If Beyond and its competitors can drive their prices down further, that would sway consumers even more. In any case, it looks like there’ll be no shortage of plant-based options for those wanting meat that’s not the real thing, but tastes and feels a lot like it.