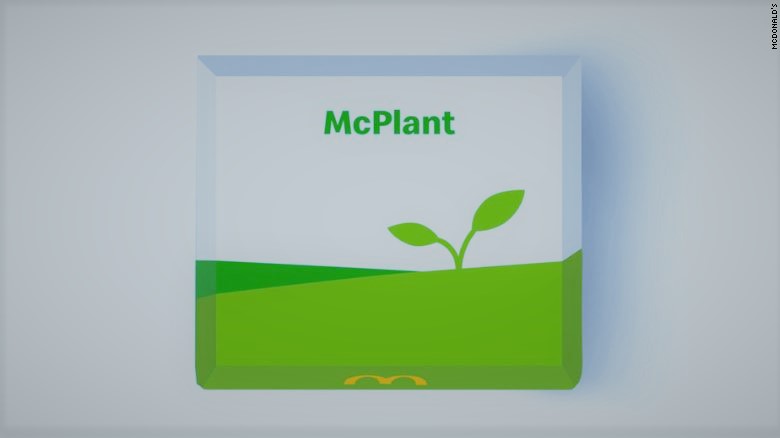 Fast-food chains have been doing what they can in recent years to health-ify their menus. For better or worse, burgers, fries, fried chicken, roast beef sandwiches, and the like will never go out of style—this is America, after all—but consumers are increasingly gravitating towards healthier options.

One of those options is plant-based foods, and not just salads and veggie burgers, but “meat” made from plants. Burger King was one of the first big fast-food chains to jump on the plant-based meat bandwagon, introducing its Impossible Whopper in restaurants across the country last year after a successful pilot program. Dunkin’ (formerly Dunkin’ Donuts) uses plant-based patties in its Beyond Sausage breakfast sandwiches.

But there’s one big player in the fast food market that’s been oddly missing from the plant-based trend—until now. McDonald’s announced last week that it will debut a sandwich called the McPlant in key US markets next year. Unlike Dunkin’ and Burger King, who both worked with Impossible Foods to make their plant-based products, McDonald’s worked with Los Angeles-based Beyond Meat, which makes chicken, beef, and pork-like products from plants.

According to Bloomberg, though, McDonald’s decided to forego a partnership with Beyond Meat in favor of creating its own plant-based products. Imitation chicken nuggets and plant-based breakfast sandwiches are in its plans as well.

McDonald’s has bounced back impressively from its March low (when the coronavirus lockdowns first happened in the US). Last month the company’s stock reached a 52-week high of $231 per share (as compared to its low in March of $124 per share).

To keep those numbers high and make it as easy as possible for customers to get their hands on plant-based burgers and all the traditional menu items too, the fast food chain is investing in tech and integrating more digital offerings into its restaurants.

McDonald’s has acquired a couple artificial intelligence companies in the last year and a half; Dynamic Yield is an Israeli company that uses AI to personalize customers’ experiences, and McDonald’s is using Dynamic Yield’s tech on its smart menu boards, for example by customizing the items displayed on the drive-thru menu based on the weather and the time of day, and recommending additional items based on what a customer asks for first (i.e. “You know what would go great with that coffee? Some pancakes!”).

The fast food giant also bought Apprente, a startup that uses AI in voice-based ordering platforms. McDonald’s is using the tech to help automate its drive-throughs.

In addition to these investments, the company plans to launch a digital hub called MyMcDonald’s that will include a loyalty program, start doing deliveries of its food through its mobile app, and test different ways of streamlining the food order and pickup process—with many of the new ideas geared towards pandemic times, like express pickup lanes for people who placed digital orders and restaurants with drive-throughs for delivery and pickup orders only.

Plant-based meat patties appear to be just one small piece of McDonald’s modernization plans. Those of us who were wondering what they were waiting for should have known—one of the most-recognized fast food chains in the world wasn’t about to let itself get phased out. It seems it will only be a matter of time until you can pull out your phone, make a few selections, and have a burger made from plants—with a side of fries made from more plants—show up at your door a little while later. Drive-throughs, shouting your order into a fuzzy speaker with a confused teen on the other end, and burgers made from beef? So 2019.