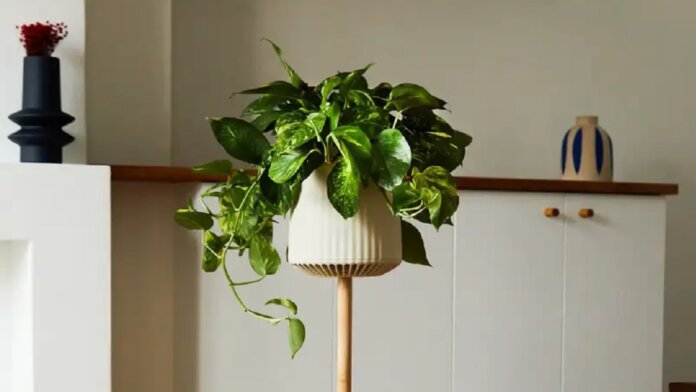 Over the course of the Covid pandemic, millions of people invested in air purifiers in an effort to keep their homes or offices as virus-free as possible. Soon they may be able to trade their electric air purifiers for a version that’s far more natural: a plant. Last week a French company called Neoplants unveiled a plant engineered with the singular purpose of cleaning the air inside peoples’ homes.

Just one Neo P1, as the company dubbed its initial product, can remove as much pollution from a home’s air as 30 regular plants, the company says. Neo P1 was in development for four years, and is a bioengineered version of a common houseplant called Pothos.

Most air purifiers are designed to remove particulate matter, like dust, dirt, smoke, or airborne bacteria. But Neo P1 was made to combat a type of pollution called volatile organic compounds. These are found in all sorts of household items, from furniture and cleaning products to paint, upholstery, and flooring. The chemicals in these items that are most harmful to human health—which are also the ones the plant was engineered to neutralize—are formaldehyde, benzene, toluene, and xylene. They can contribute to lung problems like cancer and COPD, as well as heart disease and other health issues.

In normal plants, photosynthesis uses a series of chemical reactions to convert carbon dioxide, water, and sunlight into glucose and oxygen. One of the most important enzymes for photosynthesis is RuBisCO, which is found in plants’ photosynthetic factories, chloroplasts, and is responsible for the first step in the process of turning carbon from CO2 into sugars.

Neoplants engineers figured out how to edit Pothos’ genome so that it would produce additional enzymes that can metabolize the chemicals mentioned above. The team inserted synthetic metabolic pathways that allow the plant to use these chemicals as carbon sources in its normal cellular metabolism, in the same way it typically uses CO2, turning the chemicals into plant matter.

“The more we uncover the code of the living organisms around us, the more we are amazed at its elegance and complexity, crafted by billions of years of evolution,” Neoplants co-founder and CTO Patrick Torbey said in a press release. “Our team is committed to building a green and vibrant future here on earth, where plants are upgraded as frequently as our phones, where people can see and feel the benefits of nature as clearly as any piece of technology.”

Of all the houseplants out there, the team chose Pothos because it’s robust and low-maintenance, doesn’t produce pollen or seeds, and has high phytoremediation potential—that is, it grows fast and can absorb a lot of CO2 or volatile organic compounds per unit of its own mass.

Since its founding in 2018, Neoplants has raised more than $20 million in funding, a portion of which was used to build a 12,000-square-foot research lab in Paris, where the company is headquartered. Founders Torbey and Lionel Mora (CEO) developed the idea at a French startup accelerator called Station F, launching the company in 2018. They grow their own plant shoots, but have partnered with larger gardening companies to scale growth of the engineered plants at production sites.

Those eager to own a Neo P1 can get on a wait list now, and will be able to place preorders in the first quarter of next year. The superplant won’t come cheap, though: it’s priced at $179 (incidentally, about 30 times the cost of a regular Pothos), and includes a pot designed to maximize air intake and three months’ worth of soil microbiome.

One question I’d have is, how will I know if the plant is working? Presumably if it’s growing that means it’s cleaning the air, but how can I be sure I wasn’t sold a regular plant, or that my Neo P1 is maintaining its effectiveness over time?

For now it seems customers will have to trust Neoplants’ claims if they’re willing to make the up-front investment of buying one of the engineered plants. If nothing else, it will still look pretty—and hopefully purify your home’s air at the same time.