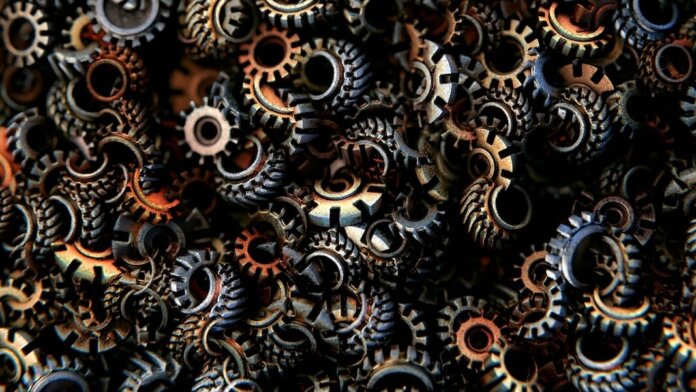 Meta’s ‘Cicero’ AI Trounced Humans at Diplomacy Without Revealing Its True Identity
Mack DeGeurin | Gizmodo
“Meta says Cicero more than doubled the average score of human players across 40 anonymous online Diplomacy games and ranked in the top 10% of players who played more than one game. Cicero even placed 1st in an eight game tournament involving 21 participants. …Cicero apparently ‘passed as a human player,’ in 40 games of Diplomacy with 82 unique players. In one case highlighted in the study, Cicero was able to successfully change a human player’s mind by proposing a mutually beneficial move.”

Researchers Are Building Robots That Can Build Themselves
Brian Heater | TechCrunch
“At the system’s center are voxels (a term borrowed from computer graphics), which carry power and data that can be shared between pieces. The pieces form the foundation of the robot, grabbing and attaching additional voxels before moving across the grid for further assembly. …Among other things, the robots need to determine how and where to build, when to begin building a new robot and just generally how to avoid bumping into each other in the process.”

Rolling Back the Years: Can Hollywood Make Harrison Ford Look 40 Years Younger?
Editorial Staff | The Guardian
“We’ll find out soon, because Harrison Ford, now 80, has been digitally de-aged in the new Indiana Jones movie. Apparently, Industrial Light & Magic, the visual effects company responsible, used new software that combined archive material of the younger Ford and new footage. It should inspire a feeling of ‘Oh my god, they just found footage,’ according to Lucasfilm president Kathleen Kennedy. To what age, exactly? Ford was 37 when he starred in Indy’s screen debut Raiders of the Lost Ark.”

First of Its Kind Gene Therapy Treatment Approved for Hemophilia
Ed Cara | Gizmodo
“A novel medication for hemophilia B has just been approved by the Food and Drug Administration. The treatment is a form of gene therapy, intended to replace a dysfunctional gene that leaves people unable to control their bleeding. It’s expected to cost $3.5 million per patient. …The company argues that the drug will likely still be less costly over the long run than the current standard of care since it should reduce the frequency of expensive transfusions; they also say that the drug’s effectiveness is expected to last for several years at least.”

A 48,500-Year-Old Virus Has Been Revived From Siberian Permafrost
Michael Le Page | New Scientist
“Seven types of viruses that have lain frozen in the Siberian permafrost for thousands of years have been revived. The youngest were frozen for 27,000 years, while the oldest was on ice for 48,500 years—making it the most ancient virus resuscitated so far. …The team says the fact that all nine viruses remained capable of infecting cells shows that ancient viruses from melting permafrost are a threat to the health of plants and animals, including us.”

Researchers Build a Working Camera Out of Atomically Thin Semiconductors
John Timmer | Ars Technica
“…it shouldn’t surprise anyone that researchers have figured out how to make electronics out of these [atomically thin] materials, including flash memory and the smallest transistors ever made, by some measures. Most of these, however, are demonstrations of the ability to make the hardware—they’re not integrated into a useful device. But a team of researchers has now demonstrated that it’s possible to go beyond simple demonstrations by building a 900-pixel imaging sensor using an atomically thin material.”

Quantum City Simulation Shows How to Make Paris-Sized Quantum Internet
Karmela Padavic-Callaghan | New Scientist
“A computer simulation of a city where universities, data centers and telecommunication hubs are connected by quantum internet suggests that existing technology is close to making it a reality. In a quantum city, telecommunications and institutions that deal with vast quantities of data would be connected in a network that uses quantum devices instead of modems and routers. These devices would take advantage of quantum effects to make information sharing within the network exceptionally secure.”

The Metaverse Is Inevitable, Regardless of What Happens to Meta
Louis Rosenberg | BigThink
“The metaverse is about transforming how we humans experience the digital world. So far, digital content has been accessed primarily through flat media viewed in the third-person. In the metaverse, our digital lives increasingly will involve immersive media that appears all around us and is experienced in the first-person. Regardless of Meta’s fate, the metaverse is inevitable because the human organism evolved to understand our world through first-person experiences in spatial environments.”