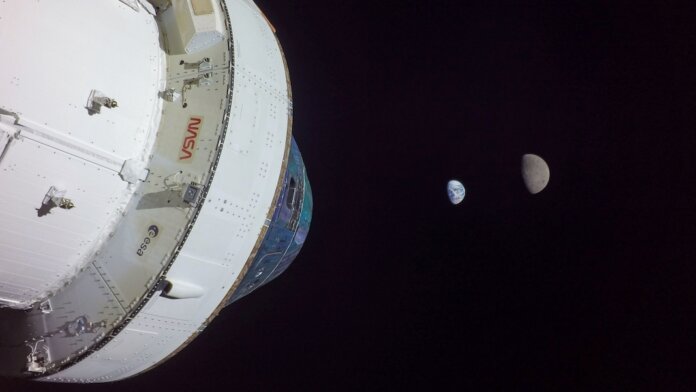 Biotech Labs Are Using AI Inspired by DALL-E to Invent New Drugs
Will Douglas Heaven | MIT Technology Review
“These protein generators can be directed to produce designs for proteins with specific properties, such as shape or size or function. In effect, this makes it possible to come up with new proteins to do particular jobs on demand. Researchers hope that this will eventually lead to the development of new and more effective drugs. ‘We can discover in minutes what took evolution millions of years,’ says Gevorg Grigoryan, CEO of Generate Biomedicines.”

Disney’s Latest AI Tool De-Ages Actors in Seconds
Jess Weatherbed | The Verge
“Remember when making actors look older or younger in movies was a huge deal? The amount of postproduction work to achieve realistic results was immense back in the day, but now, researchers from Disney have revealed FRAN, a new artificial intelligence tool that can convincingly age or de-age an actor in a fraction of the time.”

The State of the Transistor in 3 Charts
Samuel K. Moore and David Schneider | IEEE Spectrum
“In 1947, there was only one transistor. According to TechInsight’s forecast, the semiconductor industry is on track to produce almost 2 billion trillion (10^21) devices this year. That’s more transistors than were cumulatively made in all the years prior to 2017.”

Rolls-Royce Tests Hydrogen-Fueled Aircraft Engine in Aviation World First
Sylvia Pfeifer | Financial Times via Ars Technica
“The ground test, which took place at a government test facility at Boscombe Down, used green hydrogen generated by wind and tidal power from the Orkney Islands in Scotland. …It marks another step in the industry’s attempts to prove that hydrogen could play a viable role to help companies reduce harmful carbon emissions that contribute to climate change.”

The Hibernator’s Guide to the Galaxy
Brendan I. Koerner | Wired
“Scientists are on the verge of figuring out how to put humans in a state of suspended animation. It could be the key to colonizing Mars. …In recent years, these researchers have been piecing together the molecular changes that occur when certain species ratchet down their metabolism. And since so many hibernators are our close genomic cousins, there is good reason to believe that we can tweak our brains and bodies to mimic what they do.”

Orion Flies Far Beyond the Moon, Returns an Instantly Iconic Photo
Eric Berger | Ars Technica
“NASA’s Orion spacecraft reached the farthest outbound point in its journey from Earth on Monday, a distance of more than 430,000 km from humanity’s home world. This is a greater distance from Earth than the Apollo capsule traveled during NASA’s lunar missions in the late 1960s and early 1970s. From this vantage point, on Monday, a camera attached to the solar panels on board Orion’s service module snapped photos of the Moon and, just beyond, the Earth. These were lovely, lonely, and evocative images.”

The Future of the Transistor Is Our Future
Chenming Hu | IEEE Spectrum
“Semiconductors can raise the abilities of humanity like no other technology. Almost by definition, all technologies increase human abilities. But for most of them, natural resources and energy constraints make orders-of-magnitude improvements questionable. Transistor-enabled technology is a unique exception for the following reasons.”

We Could Run Out of Data to Train AI Language Programs
Tammy Xu | MIT Technology Review
“Large language models are one of the hottest areas of AI research right now, with companies racing to release programs like GPT-3 that can write impressively coherent articles and even computer code. But there’s a problem looming on the horizon, according to a team of AI forecasters: we might run out of data to train them on.”

San Francisco Approves Use of Remote-Controlled Robots to Kill Suspects
James Vincent | The Verge
“San Francisco’s police will be allowed to use remote-controlled robots to kill suspects. The city’s board of supervisors last night approved a controversial policy that lets police robots ‘be used as a deadly force option when risk of loss of life to members of the public or officers is imminent and outweighs any other force option available.’i”

Is Dark Matter’s ‘Nightmare Scenario’ True?
Ethan Siegel | Big Think
“Ever since the need for some source of gravitation, beyond the normal matter particles we know of, became apparent, dark matter has become the leading explanation for our observations. While the indirect, astrophysical evidence supporting its existence is overwhelming, all direct detection efforts have come up empty. This isn’t evidence against dark matter’s existence, but it may be evidence that the ‘nightmare scenario’ of dark matter that only interacts gravitationally, might be true.”