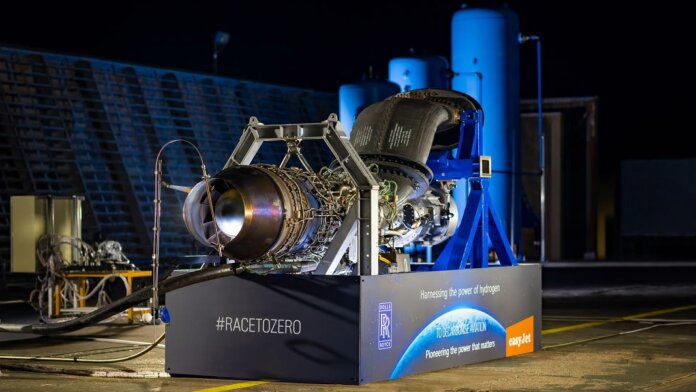 Aviation is an essential part of the global economy, but it’s also a major source of damaging greenhouse gases. The first-ever hydrogen jet engine could be a step towards solving that problem.

Unlike ground transport, aviation’s stringent weight requirements mean it can’t be easily decarbonized using batteries. Despite huge progress, the energy density—a measure of how much power you can pack in per pound—of today’s most advanced lithium-ion cells is still far below that of conventional jet fuel.

That’s a problem for aircraft, because it means that adding more batteries to boost range doesn’t provide enough extra juice to cancel out the extra weight of the batteries. While lithium-ion technology continues to improve, even at its theoretical maximum capacity it won’t provide high enough energy densities for even medium-haul flights, and new battery chemistries are still a long way off.

That’s why there’s growing interest in hydrogen as a potential aviation fuel. While it still falls short of the energy density of kerosene, it packs considerably more punch than batteries and produces no emissions when burned.

It’s not a straight swap for jet fuel though, and getting planes to fly on hydrogen will require significant redesigns. But jet-engine maker Rolls-Royce and commercial airline easyJet have taken the first steps with the first-ever ground test of a jet engine powered by hydrogen.

“The success of this hydrogen test is an exciting milestone,” Grazia Vittadini, Rolls-Royce’s chief technology officer, said in a statement. “We are pushing the boundaries to discover the zero carbon possibilities of hydrogen, which could help reshape the future of flight.”

The test was conducted using a converted Rolls-Royce AE 2100 engine and hydrogen produced using renewable tidal energy by the European Marine Energy Centre on the Orkney Islands in Scotland.

That’s an important detail, because not all hydrogen is created equal. So-called green hydrogen refers to fuel generated by splitting water into hydrogen and oxygen using renewable electricity. But the most common form today is gray hydrogen, which is produced from fossil fuels and generates considerable greenhouse gas emissions.

The companies hailed the breakthrough as a significant step towards decarbonizing the aviation sector. But there is a long way to go before hydrogen is likely to be powering a significant number of aircraft. For a start, firing up an engine on a ground-based test rig is a very different proposition than using it to fly a plane.

While the energy density of hydrogen is certainly better than batteries, an aircraft would need almost four time as much liquid hydrogen compared to jet fuel to fly the same distance, according to the BBC.

What’s more, liquid hydrogen needs to be chilled to -253C and kept under pressure. This would mean much larger and more complicated fuel tanks and systems for delivering the hydrogen to the engines, which would likely require planes to be completely redesigned. Despite those challenges though, easyJet is convinced that hydrogen is the most realistic option for decarbonizing aviation.

“We started a few years ago looking at what might power the aircraft of the future,” David Morgan, easyJet’s chief operating officer, told the BBC. “We looked at battery technology, and it was quite clear that the battery technology was probably not going to do it for the large commercial aircraft that we fly. We’ve come to the conclusion that hydrogen is a very exciting proposition for us.”

They aren’t the only ones. Airbus has been developing several aircraft concepts that use hydrogen as a fuel, and last week it announced plans to test an aircraft engine powered by a hydrogen fuel cell. Rather than burning hydrogen, fuel cells use chemical reactions to convert hydrogen into electricity that can then power an electric motor. The company is aiming to carry out the first test flights on an A380 airliner by 2026.

Even if these prototypes make it out of the lab, though, it’s an open question as to whether there will be enough fuel to support aviation anytime in the near future, given the tiny amount of green hydrogen currently produced. Nonetheless, hydrogen could play an important role in a greener future for aviation, and any progress should be welcomed.