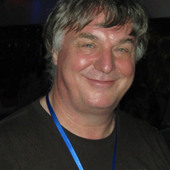 Ray Norris is a British/Australian astronomer in the School of Science at Western Sydney University and with CSIRO Astronomy and Space Science. He researches how galaxies formed and evolved after the Big Bang, and the process of astronomical discovery with large data volumes. He also researches the astronomy of Australian Aboriginal people.

Ray was educated at Cambridge University, UK, and moved to Australia in 1983 to join CSIRO, where he became Head of Astrophysics in 1994, and then Australia Telescope Deputy Director, and Director of the Australian Astronomy MNRF, before returning in 2005 to active research.

He currently leads an international project—the Evolutionary Map of the Universe—to image the faintest radio galaxies in the universe, using the new ASKAP radio telescope recently completed in Western Australia. He also leads the WTF project which is exploring machine learning techniques to discover the unexpected.

He frequently appears on radio and TV, and has published a novel, Graven Images.

Ray Norris - April 1, 2022
In 2019, my colleagues and I discovered spooky glowing rings in the sky using CSIRO’s ASKAP radio telescope in Western Australia. The rings were unlike anything seen before, and we had no idea what...
Read more

Ray Norris - August 5, 2021
Scanning through data fresh off the telescope, we saw two ghosts dancing deep in the cosmos. We had never seen anything like it before, and we had no idea what they were. Several weeks later,...
Read more

Ray Norris - January 10, 2021
In the northern sky in December is a beautiful cluster of stars known as the Pleiades, or the “seven sisters.” Look carefully and you will probably count six stars. So why do we say...
Read more

‘WTF?’: Newly Discovered Ghostly Circles in the Sky Can’t Be Explained by Current Theories, and Astronomers Are Excited