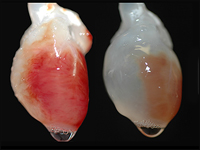 In January 2008 University of Minnesota Researchers reported that they were able to grow an entire rat heart from scratch. The story is available here at npr, and there is also an audio clip of a segment that was run on npr radio.

The associated press reports that “An estimated 5 million people live with heart failure and about 550,000 new cases are diagnosed each year in the United States. Approximately 50,000 die annually waiting for a heart donor.” If we can learn to grow hearts we could save the lives of millions of people and also extend the lives of healthy people, giving them new hearts as their old hearts wear out.

There is still much work to be done before we can grow a human heart, but the University of Minnesota breakthrough shows that researchers are making significant progress towards this lofty goal. Below is a cool video documenting the development of the rat heart:

Growing heart tissue and many other tissues of rats and other organisms is commonplace in laboratories across the globe, but growing tissue with the complex configurations and interconnectedness of organs is still a rare achievement. We recently reported on the progress being made at a company called Tengion and also in the lab of Anthony Atala at Wake Forest.

The University of Minnesota researchers offer a unique breakthrough in organ creation by creating a scaffold on which the heart can be grown. The researchers took a dead rat heart and removed the cells, leaving behind a matrix, or scaffold, of proteins and other materials. This scaffold was then injected with new cells and these cells self directed their own growth over the scaffold into a fully functioning heart.

The researches next plan to repeat their success with a pig heart. Successfully growing a pig heart would be a major breakthrough because a pig heart is very similar to a human heart in anatomy, size, and function. The hope is that the scaffold from a pig heart could be injected with cells from a human needing a new heart. The human cells would grow over the pig derived scaffold into a fully functional human/pig hybrid heart. This hybrid heart would not be rejected by the human immune system because its cells would have originated from the human that was receiving it.

Many will claim that success in growing a heart is still a dream that is many decades or more away. Perhaps they are right, but here at the Hub we argue that people too often underestimate the accelerating nature of human innovation and technology. Maybe custom grown hearts are not as far into the future as people think.