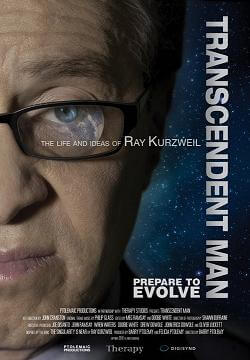 Almost two years after it premiered, Transcendent Man is finally making its way to widespread distribution, though maybe not in the way we expected. Barry Ptolemy’s look at the life and beliefs of Ray Kurzweil is a documentary film that explores concepts of digital reincarnation, personal hubris, and most importantly, the Technological Singularity.

Ptolemaic Productions recently announced that the film will be making a tour through major markets starting February 3rd, with a return to New York City. From there the movie will proceed to San Jose, LA, DC, Boston, London and Toronto. Kurzweil will be on hand at each destination, giving a talk about his belief in the Law of Accelerating Returns. While a seven city tour isn’t shabby, it’s too bad the movie won’t receive widespread theatrical release. For most of us the first chance we’ll have to see the film is its digital distribution on iTunes and OnDemand starting March 1st, or its eventual DVD release on March 24th. It’s unclear if Transcendent Man is the vehicle that will bring the concept of the Singularity to the mainstream, but it’s still a great film that’s well worth watching. Check out the trailer below.

I reviewed Transcendent Man in detail when it was first premiered at the Tribeca Film Festival in the spring of 2009, so I won’t do a formal review here. Suffice to say the documentary takes a fairly balanced look at Ray Kurzweil, his espoused beliefs, his life, and his detractors. The man not only has made exciting predictions about the future, he’s drawn the lion’s share of the criticism from those who dismiss continued exponential growth in technology as a childish dream. We cover his predictions, and their critiques, fairly regularly on this blog. Often I lament the role that Kurzweil has adopted (or been forced to play) as the figurehead for the Singularity, but watching Transcendent Man the first time filled me with a great sympathy for his steadfast adherence to his futurist convictions. It will be interesting to see if I feel the same after I buy the DVD and watch it a few times more. Even if you have zero interest in the Singularity, I recommend you check out Transcendent Man on its tour, or through its digital distribution. Whether or not you believe in Kurzweil’s Law of Accelerating Returns, his life story makes for satisfying cinema.

For those who live in the tour destinations, here is the current listing for the dates and locations: