Belgian Blues Will Blow Your Mind, These Cows Are Totally Ripped 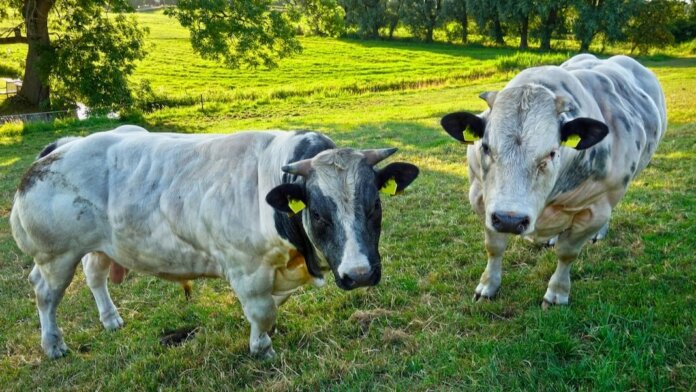 It’s been more than a decade since humans have cracked their own genetic code, but we’ve yet to wake up to a world of engineered life forms on the Island of Dr. Moreau. While we’re waiting for genetic science to mature maybe we should take a good long look at cows. Specifically, the Belgian Blue.

This muscle bound meathead is a monument to the genetic power of selective breeding. A single genetic defect, a faulty myostatin gene, is responsible for its enormous bulk, and that defect was carefully passed on through the breed for more than a century before it was even known what was causing the cattle’s impressive “double muscling.” Watch the introduction to life of the modern Belgian Blue in the video from National Geographic below.

Before we dive into modifying the human gene pool, we better learn the lessons that working with the Belgian Blue has taught us: even the most primitive genetic tools are immensely powerful, they raise serious ethical concerns, and their results are so impressive as to almost guarantee their use. With genetic testing on the rise, and artificial insemination more prevalent, sex is primed to undergo a major renaissance in the years before it’s outdone by genetic engineering.

For those who have never seen a Belgian Blue in person, the experience is…dramatic. Imagine walking past a dozen or so regular bulls and being intimidated by their sheer size and strength. Then imagine passing a bull so heavily laden with muscle it makes all those scary bulls look like cupcakes. That’s the Belgian Blue, and despite the breeds docility, it never fails to impress onlookers as a very frightening animal.

In the clip above we hear about some of the amazing advantages associated with the Belgian Blue strain. They can have 40 percent or more additional edible muscle mass, most of which is lean meat! They gain weight well, and quickly, and produce high protein milk for their young. While they comprise a relatively small percentage of the international market, the meat itself is highly prized as its lean nature makes it healthier (and some say more tender and juicy as well).

What the breeder in the National Geographic video doesn’t have time to outline are the physical problems associated with uninhibited muscle growth.

The Belgian Blue and the Piedmontese, another breed with myostatin problems, are viable farm strains of cattle. They can live, reproduce, give milk, and be consumed with no risk to humans. To themselves, however, these Conan-looking cows are less friendly. They experience a wide range of health risks associated with their muscle—calves can develop enlarged tongues and stiff legs which make it difficult, if not impossible, to feed, leading to early death. Many of the cattle develop cardio-respiratory ailments. In almost all modern herds, Caesarean sections are common due to complications in pregnancy, and in some cases C-section rates have climbed to nearly 90 percent of all births!

Both the impressive bulk and health issues of the Belgian Blue have been maintained through the relatively simple technology of line breeding. Essentially, a very few bulls are selected to be the fathers for calves in all of the females. By choosing those bulls which clearly demonstrate the myostatin defect phenotype, breeders can make more and more of the muscled cattle. Once semen is collected from bulls (as the video so graciously shows us—eww) it can be tested and then used to impregnate cows through artificial insemination. Anecdotally it is suggested that most of the world’s current Belgian Blue herds were derived from just three bulls and their descendants. While that may be an exaggeration, the truth is certainly that in efforts to perfect the breed very few male genetic lines are allowed to continue.

That’s true for all types of cattle and livestock, really.

Traditional selective breeding pushes us towards a narrower gene pool. It’s unclear if that is going to get much worse or much better as modern genetic testing takes hold. We’ve already discussed how cheaper DNA tests are allowing cattle breeders to choose the absolute best bulls for line breeding. Those cheap tests mean that any rancher can now see if they have a prize bull. That may open up breeders to using new fathers, or it may simply replace the very small number of current stud bulls with a new, but equally small, generation of replacements.

Either way, what’s good for cattle is slowly becoming good for humans.

Though no one seems to want to phrase it in this way, humans are starting to adopt selective breeding habits and technologies. There are now several companies that sell genetic tests in association with in vitro fertilization (IVF) clinics. With good cause, I might add. Successful testing for Tay-Sachs has helped dramatically reduce the occurrence of that disease in the US. Most of these newer genetic testing companies are looking to repeat that success for more than a hundred other genetic conditions.

Wouldn’t you want to know before you got pregnant if your children would be at high risk for crippling ailments? If you are a genetic carrier for such a disease, then preimplantation genetic diagnosis (PGD) can allow you to select fertilized embryos without the disease. IVF and PGD are giving us the tools necessary to, at least in terms of our own gametes, become selective breeders. Breeders informed with rudimentary genetic information, which is a step up from those Belgian farmers who first started propagating their mutant cows.

We’ve discussed before how genetically engineered animals are on the horizon and could be on our plates in the near future. The Belgian Blue’s mutant myostatin gene variation has even been spliced into rainbow trout to give them more bulk (and thus more worth as food). Animals are already being genetically engineered, and if work in primates is any indication, we’re slowly approaching the time when scientists will be able to waltz inside a human embryo, tinker with its DNA, and get the child to come to term.

That possibility, however, scares the sh*t out of most people, and angers the rest. The chances that human genetic engineering is going to have a smooth transition into becoming a popular technology is almost nil. Expect legal and social hurdles to abound. Hell, I wouldn’t be surprised if armed conflict arose around this controversy as well. It could take decades before we accept such technology, though my bet is eventually that we will.

Meanwhile, modern sex powers on. PGD and IVF aren’t universally accepted, but they aren’t fueling riots either. Morally, they are a much more widely acceptable technology. Personally, I know a few IVF (possibly even PGD) kids and my world would be a lot poorer if they weren’t around. I’m glad it’s an option for parents.

But that doesn’t keep it from being a stepping stone to some pretty amazing selective breeding opportunities that could give us the equivalent of designer babies even without genetic engineering. See the Belgian Blue? That’s a single mutant gene that turned out to be helpful, and that simple breeding habit was propagated for more than a century.

We’ve already seen human children who were born with the equivalent of the myostatin defect seen in the monstrous cattle. Picture a time when we discover other, relatively rare but potentially advantageous, genetic mutations. Imagine if everyone had the ability to comb through their sperm and find those mutant gametes with the desired traits you want. You could optimize your offspring—give yourself super babies with no genetic tampering required. Long before genetics is ready to replace it with something better, sexual reproduction is going to get more and more impressive thanks to modern technology.

I look forward to seeing all your Belgian Blue-like children in the future.