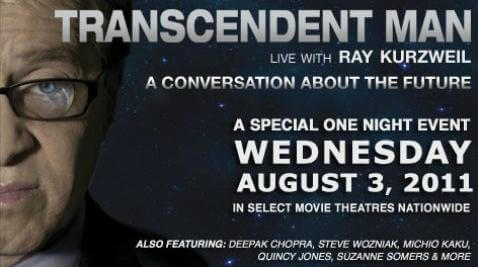 The future is coming to the 49 out of 50 of the United States (sorry, Wyoming). On August 3rd, Transcendent Man: A Conversation About the Future will be appearing in 500+ theaters across the country. This LIVE broadcast panel discussion will focus on accelerating technologies, the future of humanity, and the Singularity. The star-studded panel includes powerhouses like futurist Michio Kaku, Apple co-founder Steve Wozniak, inventor Dean Kamen and many more. Barry Ptolemy, director of the Transcendent Man documentary will be on hand, as will the subject of that film, Ray Kurzweil. There’s also a long list of “special guest appearances” including Bill Maher, Suzanne Somers, Al Gore, Quincy Jones, and Elon Musk. In other words, this is going to be a massive event, and a great debate on what the future should and will hold. Check the listings on Fathom Events for tickets in your area and watch the trailer for the August 3rd nationwide screening below. Transcendent Man has been gathering momentum since its premiere more than two years ago. Could this event propel the film, and the concept of the Singularity, into the mainstream?

While this event looks to be a general discussion about the Singularity, it’s based on the film Transcendent Man now available on DVD and digital download. For those unfamiliar with the film, Transcendent Man is a documentary on futurist Ray Kurzweil. The movie explores the idea that technology may be compounding upon itself, that the innovations of today lead to even larger innovations tomorrow. The most famous case of this growth is Moore’s Law, which states that the number of transistors that can be placed inexpensively on an integrated circuit doubles approximately every two years. Kurzweil has found the same general exponential trends apply to many other technological fields. In general, he calls this kind of compounding change (not limited to technology) his Law of Accelerating Returns. If you accept that such exponential growth is likely to continue the possibilities of the future are truly miraculous. Human level artificial intelligence in the next twenty years, widespread nanotechnology, man merging with machines, the Technological Singularity…it’s a lot of change for the mainstream public to accept.

Which is why this panel discussion is so amazing. You’ve got a killer list of celebrities and visionaries looking to debate the most nebulous and yet important subject: the future.  With guests like Bill Maher, Deepak Chopra, and Michio Kaku you know it’s going to be an interesting conversation. Hopefully that will attract thousands of people and introduce them to the concepts of accelerating technology and exponential growth.

I’m also pretty impressed with how easy and ubiquitous simulcasting is now. We can’t all attend the event live at the Lincoln Center in New York City, but for $15 or less (prices will vary by location) we can all attend Transcendent Man: A Conversation on the Future. That’s a level of accessibility that could really push the discussion about the Singularity from blogs and cable TV into mainstream consideration. Once we take the idea of the Singularity seriously, we may just be able to control how and when the rise of these advanced technologies occurs.

I can’t wait to see what happens when some of the biggest names in technology go head to head in a nationwide event. It’s going to be amazing.