Want to lose weight? Well now there’s a drug that allows you to shed ten percent of your body weight – no exercising, no unsavory dieting necessary! Just take a pill and start watching the pounds drop off.

Heard that one before? Well drug-maker Vivus, Inc. – and their investors – hope you hear it again and often in the coming months. The Phase III trial results of their weight loss drug, Qnexa, was presented to an FDA advisory panel recently. The panel thought the data convincing enough to recommend by a 20 to 2 vote that the drug be okayed for sale. The FDA is expected to give its final say on the drug by April 17.

Following the advisory panel’s announcement the stock value of Mountain View-based Vivus shot up 98 percent. After seeing all those slim movie stars on the red carpet, of course people are going to demand a weight loss pill!

The message here is that the drug is both effective and safe, but we’ll have to take their – and the FDA’s – word for it as data from the trial on the drug has yet to be published, but Vivus says that people who took Qnexa dropped an average of 10 percent of their body weight.

Qnexa is actually a cocktail of drugs that have already received FDA approval. Phentermine, an amphetamine and an appetite suppressant, and topiramate, an anti-convulsant ingredient in Topamax, used to treat epilepsy and migraines.

Remember Fen-Phen, the ‘miracle’ weight loss drug popular in the ‘90s then quickly unpopular as it was discovered that the drug was damaging heart valves? Fen-Phen is short for its drug combination fenfluramine and phentermine, the same phentermine now part of Qnexa’s cocktail. Because it is an amphetamine, phentermine can lead to increased heart rate and blood pressure which then lead to heart palpitations. Speeding up the body’s metabolism is part of the reason it causes people to lose weight. It’s currently being prescribed over short periods of time to overweight people already taking other measures, like exercising or dieting, to lose weight. 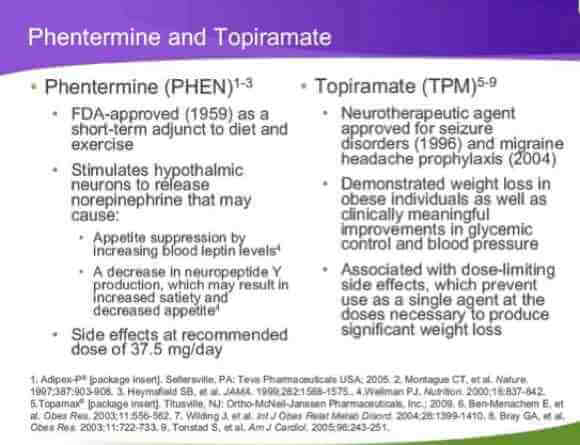 Topiramate has its own set of side effects including memory loss, confusion, concentration problems, constipation, depression and thirty or so other moderate to serious side effects. Looking at the list provided by the National Institutes of Health one wonders what side effect the drug doesn’t cause.

If Qnexa gains FDA approval on April 17 it would be only the second weight loss drug in 13 years to do so. Xenical won approval in 1999 to help obese people lose weight.

Given the side effects and the travails of diet drugs past, one could understandably be dubious about Qnexa’s safety, regardless of the panel’s recommendation. True, both phentermine and topiramate have been prescription drugs for a long time but that doesn’t mean we know how they’ll affect the body when taken together for years or longer. The FDA, let’s hope, has learned their lesson from not only harmful weight loss drugs but drugs like Vioxx which faced billion dollar lawsuits after it doubled the chance of heart attack or stroke in tens of thousands of people. Prudently the FDA is requiring Vivus to perform a longterm analysis of the drug’s health effects, specifically how it affects the heart. Strangely, however, the FDA may allow the company to begin selling the drug to people before the studies have even begun. Doesn’t make a whole lot of sense to me. I guess the first people to take Qnexa will become the “unofficial” participants of such a study. The FDA reasons that, for an obese person, the benefits of losing weight, um, outweigh the risks of side effects. But let’s be honest, obese people aren’t going to be the only people asking their doctors for the pill. For many, the risk of looking bad in a bikini will be reason enough to take it, and we can count on at least some doctors to give it to them.