Colorful lights dancing in the night sky in synchronized motion would make any UFO enthusiast’s heart skip a beat, but the fact that the crafts producing the mesmerizing lightshow are quadcopters doesn’t make it any less astounding.

Last week, the Ars Electronica Futurelab in collaboration with Ascending Technologies put on a performance using a swarm of 49 LED-equipped quadcopters for the crowd at the 2012 Klangwolke (meaning “Cloud of Sound”) Music Festival in Linz, Austria.

Not only was it an impressive display, but it broke the world record for the number of synchronized quadcopters in a swarm, outdoing previous swarms by the GRASP lab from the University of Pennsylvania.

A video posted on YouTube shows highlights of the quadcopter presentation:

Is there no end to what quadcopters can do?

These UAVs are AscTec Hummingbirds, which are capable of some pretty impressive aerobatics, so syncing them up into a swarm is also an incredible feat. But the WOW! factor is kicked up an order of magnitude when the technology disappears and observers can witness a display in the sky that could be right out of Close Encounters of the Third Kind. In the comments of the YouTube video, Ars Electronica indicated that the show will go on the road around the world, including the US and Australia.

Although some may view collections of robots working together as the ultimate demise of humans, it’s awesome to see a demonstration of swarm technology that is creative and beautiful. 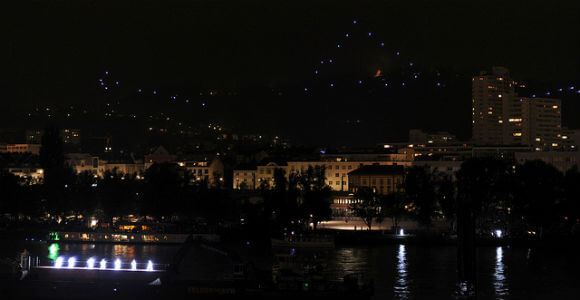