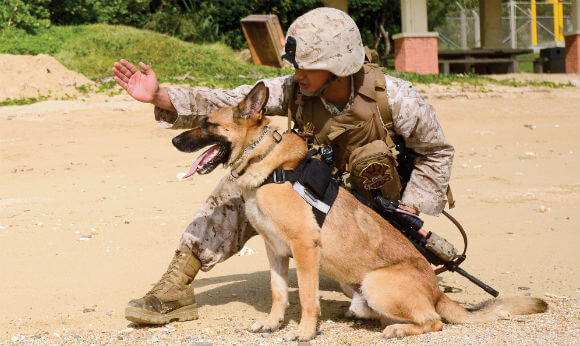 As any canine lover will tell you, you’d be hard pressed to find a true replacement for a dog. But for the past few decades, researchers have been attempting to mimic a dog’s sense of smell, especially when it comes to sniffing out explosives. Fortunately for military personnel, airport security, and bomb squads, advances in explosives detection technology has led to remarkable advances. Today, a handheld device called the Fido explosives detector can sense TNT vapors at a parts-per-quadrillion concentration, on par with the sensitivity of a dog’s nose.

For the lives of soldiers and civilians that have been saved in Iraq and Afghanistan — just to name a few — you can thank fluorescent polymers and other sensing technology developed in the lab of chemistry professor Timothy Swager at MIT.

Dr. Swager’s lab developed polymers that detect TNT about a decade ago and demonstrated the system for the military. Here’s how it works. As a solid, the polymer film is designed to naturally fluoresce when excited. This means that it will absorb a specific amount of energy in the form of light and will emit that energy as visible light. A handheld detector then measures the amount of light emitted. Now when a certain type of molecule, in this case 2,4,6-trinitrotoluene or TNT, is present, energy from multiple sites of the polymer transfers to it instead of being emitted, which helps to amplify the detection of single molecules. The result is that a small but measurable dimming of the light is observed and registered as sensing of the TNT.

In 2007, Professor Swager won the prestigious Lemelson-MIT Prize, an invention and innovation award that has been dubbed the “Oscar for Inventors.” He joined a short, but impressive list of previous winners including Stephen Quake for the integrated biochip, creator of the Segway Dean Kamen, John Rogers for biointegrated electronics, and, of course, Ray Kurzweil back in 2001.

Yet, as far as the technology has come, it’s still not quite ready to replace dogs entirely. In fact, a sales director for Flir Systems who licenses the technology from Dr. Swager, told The New York Times, “We see our technology as complimentary” to dogs.

Even though the canine sense of smell is not completely understood, dogs remain the best explosives detection system that humans have devised to date. But their use comes with certain drawbacks. They require expensive training, often work with a single trainer, and can get distracted from the task. On top of these problems, they must rest and require routine care, which can be inconvenient in places like a battlefield. Finally, they are not foolproof, as they also falsely detect explosives on occasion.

Part of the interest then in devising an artificial equivalent to the canine is to improve the ease of use and maintenance, reduce cost, and minimize the degree of training required. Additionally, a system that accurately senses low concentrations of chemical vapors could possibly be altered to detect other chemicals, such as other explosives. In fact, the company is currently developing a handheld device that can detect up to eight different explosives at a time.

A year ago, Flir Systems released a version 2.0 of its popular Fido XT detector called the Fido NXT, which involved a redesign of the whole device, as you can see in this video:

Along with creating this improved version of the detector, Flir has partnered with iRobot to equip PackBots with explosives detection, and over 100 of these units have been ordered by the U.S. military. Concurrently, Flir has been developing other detection systems that use mass spectrometry, the same method of chemical analysis that is currently installed on the Mars rover Curiosity to analyze soil samples. But the portability and ruggedness of these systems is limited.

Researchers and companies continue to explore ways of improving explosives detection through chemistry. Chinese researchers recently reported a new type of material that has the potential to create explosives sensors for water testing, which could be used to monitor groundwater or runoff from suspected bomb manufacturing by terrorists. Because of their unique sensing properties, new detectors using carbon nanotubes are increasingly looked at as the future, so it’s no surprise that researchers interested in explosives detection have been exploring their utility. Just this week, Chemring Detection Systems was awarded a $29 million contract for the U.S. Army to provide its infrared atmospheric scanning system to detect chemicals in vapor clouds.

Threats of explosives loom large. There are an estimated 100 million landmines buried around the world and one person is injured or killed by a landmine every 22 minutes, according to the Tutu Foundation. Another major threat is improved explosives devices or IEDs, which have been responsible for over 50 percent of fatalities of Coalition forces in Afghanistan, not to mention those left injured or crippled by the devices.

Down the road, artificial sensing systems could be developed for drug detection — the other common use of sniffer dogs — but the key to these devices will be to make them highly sensitive and portable. There are a number of technologies for detecting drugs in solid and liquid samples, but many of these are benchtop devices. Philips has been developing a handheld device for the detection of illicit drugs in blood and saliva, but what’s really needed is a vapor detector akin to Fido that can measure down to parts per quadrillion. That’s a tall order as currently used devices, like the Sabre 5000, measures trace amounts of narcotics in the vapor but only at parts per million range. The trick is to find a way to amplify detection of much lower quantities of chemicals from illegal drugs.

While we await the development of these technologies, it’s worth lauding Professor Swager’s research group and Flir Systems for the current state of explosives detection. As the face of war, terrorism, and domestic threats have changed with the ease of obtaining bomb-making periphenalia, it’s good to know that sensing technology like Fido has advanced the field and eased the dependence on canines.

Perhaps someday the Alpha Dog from Boston Dynamics will collaborate with Flir to create a fully robotic canine that is battle ready.