Google is venturing again into the realm of augmented reality with its reveal of a new mobile game called Ingress. Though the multiplayer game is currently in closed beta, Google has built a marketing campaign around it that entices players who were drawn to TV shows like Fringe and Lost.

In the game, a mysterious energy has been unleashed on Earth which can influence the minds of people. Two groups form, the Enlightened who seek the benefits of this new energy and the Resistance that aim to preserve humanity. Players choose a side and then interact with objects in the physical world to collect energy, go on missions to “portals” (in public places), acquire clues to the mystery, and capture territories. In an evolving storyline, players collect more information and interact with other players around the world in order to control the new energy.

Currently available for Android phones through Google Play with plans to make an iOS version soon, Ingress is a free download.

Check out the recently released video promo of Ingress:

The following screenshots give you a sense of how the mobile phone gets transformed into a controller to interact with the augmented reality world: 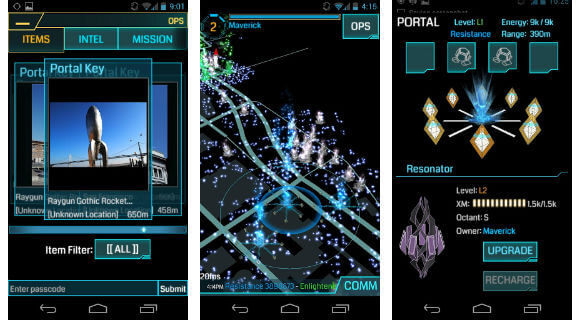 As the game is currently invitation only and is shrouded in mystery as part of its story, what is known about it is somewhat limited, but it’s clear that the game draws on much of the location data that Google has collected from Street View maps. Google’s Niantic Labs, which has been developing the game, launched FieldTrip as its first title, an app that allows you to discover the hidden things in the world around you.

As John Hanke, head of Niantic Labs, explained to All Things D: “We were definitely inspired by JJ Abrams.”

Gameplay appears to fall into two phases: collection and review.  This means that outdoor exploration, and hence physical activity, is a key part of the game. After collecting energy by going in Pac-Man like mazes, players can later review what they explored on their phones, communicate with others, and follow the progression of the story.Considering all that Google has done collecting location data for maps, including interiors, and all the big data that the company glean from Search that has produced features like Knowledge Graph, odds are that even more apps and games will be on the horizon with even greater sophistication.

Google hasn’t revealed a clear business model for the game, and whether it will monetize it with in-game purchases remains to be seen, but one way is obvious: ads. The company has already started forming partnerships with companies, which could offer locations as part of the game or even merchandise to go along with it.

Eventually, the game will be opened up to developers as a platform for their own storylines within the world that’s been created by a team of writers. Hanke indicated that players will be able to shape the story as well.

Augmented reality games for mobile devices aren’t new. One of the more popular games, Shadow Cities, was launched last year. In that game, neighborhoods becomes territories that must be defended by users playing the role of protecting mages. While support for that game seems to have laxed a bit by the developer Gray Area and rumors of dwindling users populations have hit the forums, Shadow Cities is a notable trendsetter in location-based gaming, a niche gaming market that is likely to have a long history as more location information is captured in the digital world.

Seeing how we are on the cusp of wearable computing, augmented reality is just getting started.

Earlier this year, Google announced Project Glass, its venture into creating an augmented reality headset due out next year. While the company is busy working out the hardware that will blur the distinction between physical and virtual worlds, Niantic Labs is nicely positioned to possibly become the engine for creating unique apps for the headset. After all, the world’s first mainstream augmented reality device deserves better than ported software from mobile devices.

So if you see a group of people holding phones and mesmerized by corporate art, don’t be alarmed. They’re not under mind control — they’re simply receiving instructions in a virtual reality designed by one of the world’s biggest companies.

Nothing wrong with that…oh wait.