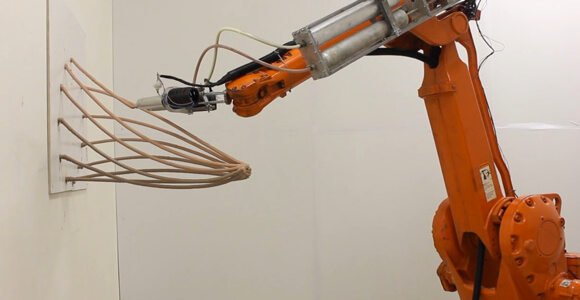 3D printers build objects by cross-section, one layer at a time from the ground up—gravity is a limiting factor. But what if it wasn’t? Using proprietary 3D printing materials, Petr Novikov and Saša Jokić say their Mataerial 3D printing system is gravity independent. The duo’s method allows a robotic arm to print objects on floors, walls, ceilings—smooth and uneven surfaces.

Novikov and Jokić invented their system (patent pending) in collaboration with the Institute for Advanced Architecture of Catalonia. It uses a thermoplastic that cures on contact with the air, not unlike the 3Doodler, a Kickstarter project that places an extruder in human hands to draw 3D forms on the air.

In contrast to the 3Doodler, Novikov and Jokić’s system is a software-controlled 3D printer. Carefully timing the arm’s movement with the thermoplastic’s setting time allows the apparatus to make self-supporting structures on the spot. The machine moves methodically to allow the material to set (the video is sped up 3X), but it can make strands of varying thickness by changing the speed. Users can produce strands in color by injecting dyes (in CMYK) throughout printing.

Why is this an improvement on current tech?

Novikov and Jokić say, “This method gives us a flexibility to create truly natural objects by making 3D curves instead of 2D layers. Unlike 2D layers that are ignorant to the structure of the object, the 3D curves can follow exact stress lines of a custom shape. Finally, our new out of the box printing method can help manufacture structures of almost any size and shape.”

Whether the system can print a wide variety of shapes isn’t shown in the video. And from the look of it, the end product isn’t terribly high resolution. Further, while the process is gravity independent, it is highly material dependent—only made possible using a specific type of plastic that may prove suitable for a limited set of practical uses.

But the concept is cool, and the tech will likely improve. Maybe something like it will prove useful in low-g environments, an area NASA has shown interest in developing. And whatever its ultimate practicality, I can imagine any number of impractical but visually pleasing applications in the art world.