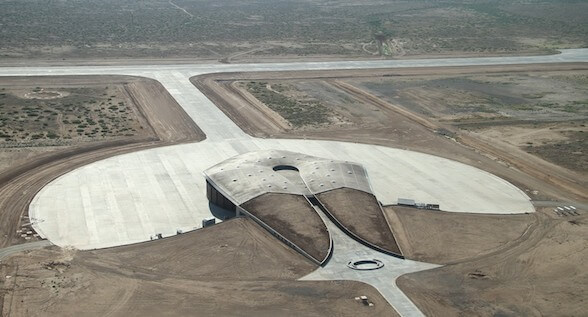 It was just over a century ago that the Wright brothers developed a flying machine that lifted them into the air, which would evolve into today’s safer-than-ever airline industry that saw 37.5 million business and leisure flights last year. Considering that it was only 52 years ago that Yuri Gagarin become the first person to travel into space, the world seems poised for similar exponential growth in the space flight industry.

But where will this revolution get off the ground? In the desert of southern New Mexico, if all goes according to a handful of aerospace companies and contractors. They are looking to make Spaceport America the world’s first commercial spaceport for the masses.

Spanning  18,000 acres, Spaceport America is a $200 million operational facility located next to the US Army White Sands Missile Range and owned by the state of New Mexico. The site has hosted 17 vertical launches since 2006, is scheduled to be the new testing ground for the SpaceX Grasshopper in development, and is slated to become the worldwide operational headquarters for Virgin Galactic, which plans to vault the space tourism industry into prominence. A 12,000-foot launch runway has been built and fire crews have been brought on site. Other tenants of the facility include UP Aerospace and Armadillo Aerospace alongside seasoned Lockheed Martin. Although two welcome centers for the public aren’t scheduled to be completed until next year, weekly preview tours are available as are public launch viewings. 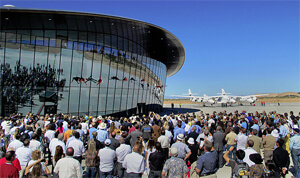 A spaceport is the stuff that sci-fi aficionados and tech enthusiasts everywhere have only dreamed of, but because spaceflight has been firmly in the hands of government agencies, the path to space was a challenging one. But given NASA’s retirement of the Space Shuttle program and increasing reliance on outsourcing to private firms, the time seems right for the mantle to be passed to private industry.

In recent months, a steady stream of space-related news stories and videos have enticed the public’s imagination about the possibilities of space, as the technology to make routine travel safe seems to be close at hand. Just look at some of the headline-breaking space stories from the last year or so: the first private spacecraft SpaceX Dragon docks with the International Space Station, the safe landing of the Curiosity rover on Mars, Felix Baumgartner’s record breaking space jump from 24 miles above the Earth’s surface, the formation of Planetary Resources to mine asteroids, the announcement of a 2018 mission to colonize Mars spreadheaded by the world’s first space tourist Dennis Tito, Virgin Galactic’s SpaceShipTwo rocket going supersonic, and the world’s first crowdfunded space telescope.

Collectively, these stories resonate with a message getting more prominent all the time: space is closer than we think.

In fact, the space tourism is expected to be a huge industry, on the order of $600 million to $1.6 billion (in a growth scenario) in 10 years, according to The Tauri Group. So it’s no wonder that Spaceport America isn’t the only facility under development. A variety of launch sites and spaceports have been proposed in California, Texas, and Florida as well as a handful of other states, but which one will become the Disney World of space remains to be seen.

If you want to learn more about Spaceport America, National Geographic created a n hour-long MegaStructures show about it – you can find the full show unofficially uploaded by YouTube, or watch the trailer on the NatGeo site. You can also watch a New Mexico State University show from last December with the CEO of Spaceport America, Christine Anderson, and Virgin Galactic Senior Program Manager Mark Butler  discussing some of the local issues related to the spaceport’s operation. Finally, here’s a local TV station’s take on the spaceport with some on-site footage: