Branson: Virgin Galactic On Schedule To Put Tourists In Space Next Year 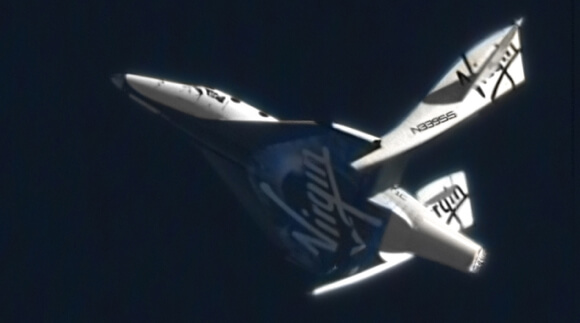 Virgin Galactic’s SpaceShipTwo successfully fired its rockets for a second time this week. The spacecraft was released at 46,000 feet by its WhiteKnightTwo mothership, where the craft commenced a 20-second burn, reaching 69,000 feet and a speed of Mach 1.43. After the burn, the ship folded its wing and tail sections upward into a “feathered” position to slow its rate of descent smoothly, like a “shuttlecock.”

It was the fastest and highest test yet. The first powered flight was a 16-second burn to 55,000 feet. But more importantly, it was the spacecraft’s first “feathered” mission and first execution of all flight phases together.

More flight tests, each with a longer burn, are upcoming through the end of the year. Virgin Galactic CEO, George Whitesides, recently said the full test program is not yet in stone but will likely be less than 20 flights.

“We’ll do a few more test missions early next year to simulate the customer experience, then we should be ready for commercial service.”

According to Virgin Galactic founder, Richard Branson, the firm is putting the final touches on cabin interiors, flight suits, and training programs, among other key details, and they are on track to begin commercial service out of Spaceport America in 2014. To recapitulate: Tourists will be regularly traveling to space next year.

Although the flights will be suborbital (i.e., the spacecraft doesn’t go high enough to make a full circuit of the Earth) passengers will experience weightlessness and see the Earth’s curve below. More than 600 folks have tickets, exceeding the total number of astronauts, to date.

And after suborbital? If commercial space tourism proves itself capable of taking this first step, the floodgates could open. More investment, more development—space is the limit. Or at least, that’s the dream. And it’s a lovely dream, and about time too.