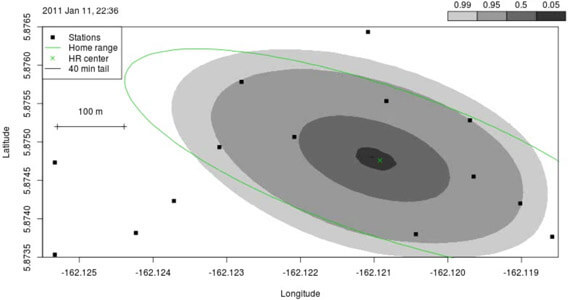 Much of what modern scientists know about the world has been sussed out and communicated with radio waves. But radio technology doesn’t work underwater, leaving us startlingly ignorant of what goes on in the oceans that cover two-thirds of the planet. To take but one example, what we know about marine mammals we base largely on trackers that work only when the animals surface for air.

But what about fish? Even as climate change has made it more important for us to monitor the health of the oceans, the science of tracking and counting fish remains relatively rudimentary and haphazard. Some important questions, such as whether climate change has triggered the explosion of jellyfish along European beaches, can’t be answered for lack of baseline data.

A recent study from the University of Mānoa proposes a method to expand what is known about fish populations and migrations by making better use of the information current underwater tracking technology provides.

Marine biologists track fish with trackers that emit sound. They pick up the sounds at listening stations placed underwater in strategic locations.

“We’re used to knowing within 20 feet where you can find that bison, wolf or bird. But underneath the ocean surface, we don’t have the luxury of using GPS. So marine scientists use sound, which results in much lower accuracy,” said Kevin Weng, who manages the Pelagic Fisheries Research Program at the University of Hawai‘i at Mānoa.

If a fish doesn’t pass within listening distance of a listening station, generally no data is recorded on its whereabouts. Weng and postdoctoral fellow Martin Pedersen point out that that’s absurd. Scientists know something about the elusive fish’s location: They have a reasonable range of places it could be based on where they know it’s not and where it last was.

“Previous methods were not formulated with the fish, ocean and acoustics in mind. They therefore do not exploit all available information, such as the biology of the fish limiting its range of possible movement,” said Pedersen. 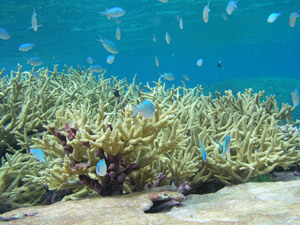 Weng and Pedersen note that the tracker noise gives some information about the fish’s distance from the listening station. Indeed, the same triangulation that is used to location smartphones and even gunshots, can be used to find errant fish. And when there’s no reading, the species’ habits can point researchers to a general area beyond the reach of the listening stations where the fish is most likely to be. The model identifies such proposed locations for fish and attaches a confidence rating.

In a trial of the modeling method at Palmyra atoll, researchers were able to estimate with 95 percent confidence fish locations to a 50-meter region during daylight hours.

“It helps us to better understand how they feed, breed and rest. Ultimately, more accurate movement information will help us to conserve these species,” Weng said.

Other proposals for obtaining better data on fish populations and migrations include attaching mobile listening stations to whales to expand the areas where scientists can listen for fish.

Several robotics companies are also endeavoring to learn more about the oceans by deploying robotic sensors that collect data in remote locations that buoys and underwater sensors can’t reach.

But while these technologies ramp up, why not make better use of the data we already have?