The May issue of National Geographic boldly states, “This Baby Will Live to Be 120 (and It’s Not Just Hype)”; Pew Research published a poll on radical life extension in August; and in September, Google invested in a new company, Calico, to tackle aging.

Independent of all these developments, Chicago filmmaker, Tim Maupin, launched a Kickstarter for a short film titled, “The Last Generation to Die.” Maupin thinks now is a great time to start a conversation about life extension. And he’s right.

The idea that within decades a genetic fountain of youth may plausibly reverse the aging process, even indefinitely stave off death, seems to be rising up in pop culture.

Maupin’s Kickstarter has so far raised over $15,000—$6,000 more than its initial funding goal. Encouraged by the positive response, they’re dreaming bigger and hope to fund a stretch goal of $25,000 in the last 10 days of the campaign.

When I spoke to him, Maupin told me he’d been playing around with the idea of doing a film about a father and daughter set in the future for a few years. But the story didn’t click until he read about emerging medical technologies and the possibility of life extension in Michio Kaku’s book, Physics of the Future.

After reading Kaku’s book, he saw an intriguing angle on a familiar story. A topic that would resonate with folks right now, be based in plausible science, and yet feel unfamiliar and distinctly futuristic. 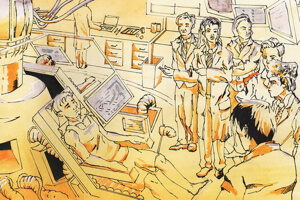 The film is set in 2043. A main character works for fictional firm, Apeiron Life, the first company to commercialize life extension treatments. (Not inspired by Google and Calico—simply good timing.) She offers her father early treatments, but he soon stops coming, saying he’d rather let nature take its course.

Maupin told us, “I’m in my early thirties and my parents are getting to that age where I’m starting to think about [their mortality] a lot more. And if this technology were available now, I don’t think that they would opt to do it.”

Though he leans towards living indefinitely, Maupin said he’s still open minded. The film is meant to be a meditation and exploration of both beliefs. “It’s the most profound thing we have to deal with as part of the human experience, and to erase what we’ve thought for thousands of years is a pretty daunting thing for a lot of people.”

Maupin said about half of the people he talks to would opt in, while the other half prefer a natural death. His observation matches the 56% of Americans who say they wouldn’t undergo radical life extension treatments in a recent Pew Research poll.

Divergent beliefs on death and life extension may separate parents and children, but they may also split couples and friends of the same generation. What would it be like to watch loved ones elect to age and die, while you remain youthful and healthy?

Maupin hopes the film strikes a balance between realism and visually pleasing effects. Much may appear unchanged in the 2040s. The most powerful technology may be subtle and hidden. Depicting such a world is more complicated than introducing holographic displays and hand waving.

For example, he notes, “AI is going to be much better at that time. What would AI do when you walk into a room?”

Recreating the cascade of automated processes kicked off by the mere presence of humans may serve to draw viewers into 2043. Or cell towers didn’t exist thirty years ago—what new infrastructure might sit on the horizon thirty years from now?

That said, compelling visual effects will also be central. Maupin believes effects are most effective when “practical and digital” are mixed. The team plans to shoot in settings with a futuristic look, and then add subtle, powerful effects in post-production.

The Kickstarter campaign has already exceeded its $9,000 funding goal—the bare minimum needed to make a good film, in Maupin’s estimation. At that level, the crew would largely work for free, and they’d need to call in favors and find equipment on the cheap. To make the film even better, they set a stretch goal of $25,000.

Asked what difference that might make, Maupin told me, they are seriously pursuing the possibility of adding a celebrity to the project, and $25,000 is the minimum they’d need to do that. But they can also consider a few more intriguing locations and afford to pay the crew. Already, there’s a little breathing room at the current $15,000 funding level. But Maupin says, “We really hope to hit $25K and maybe even go a little further.”

Lower pledges get a variety of rewards and either a DVD, BluRay, or private link to the film. Those at the $125 level and from St. Loius, Chicago, LA, or New York get a thumb drive with the movie and a piece of the set stashed somewhere in the city. (You’ll need a GPS-enabled smartphone to receive the prize’s coordinates.) Higher pledges will be in the movie or credited as an associate producer or producer.

Once complete, likely sometime next summer, the project’s supporters will be first to see the film. After that, Maupin hopes to play some festivals. And who knows, he said, if it’s a popular concept, there may be room to make a feature film—but such an endeavor yet remains firmly in the future.