Small, Fast and Cheap, Theranos Is the Poster Child of Med Tech — and It’s in Walgreen’s 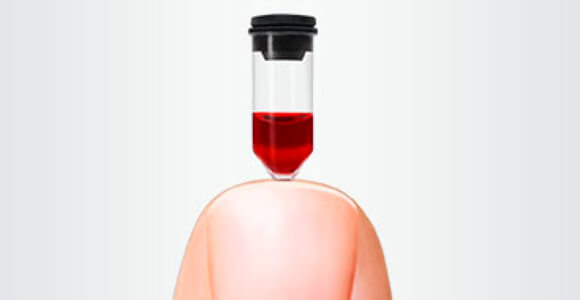 A number of startups are selling portable diagnostic laboratories that require just a drop of the patient’s blood, made possible by advances in the field of microfluidics. But perhaps lab tests can be made faster, easier and more accurate with a turn-of-the-last-century technology: automation.

That’s the bet the Silicon Valley company Theranos is making, and the company recently sealed a deal with Walgreen’s Pharmacy to deliver on-site laboratory services to many of its stores.

Henry Ford would recognize the principle that allows Theranos to complete accurate lab tests within four hours: Consistency and automation increase speed and bring price down. Even so, Theranos’s selling point is much smaller than a Model T: a capsule-sized lab vial, and just one needs to be filled for the company to run nearly any standard lab test.

Here’s how it works: Blood is drawn with a finger stick, rather than a needle in the arm. (It can also run urine tests with just a drop of that.) There are no botched sticks — of course, there are no phlebotomists, only machines, in Therenos labs.

The bad news for workers may be good news for accuracy because human handling of samples accounts for the lion’s share of variation among results, founder and CEO Elizabeth Holmes said last week at a technology conference in New York. Automation eliminates spills, tests done in error and other mishandling of the sample.

Holmes has spent the decade since she dropped out of Stanford  quietly developing the machines to handle one-drop fluid samples and provide results within a matter of hours.

“Theranos has worked relentlessly to reach a point at which we could help make actionable information accessible to physicians and patients at the time it matters most. Clinicians can now see their patients having received lab results from fresh samples in a matter of hours,” she said in a statement.

In a few cases, Theranos has designed new diagnostic methods to shave time from the process.

The machines mete out bits of the “micro-sample” for each test a doctor has ordered. In conventional testing, each test requires a dedicated vial, which adds dramatically to the amount of blood required. Theranos is even able to save some of the tiny sample in case the doctor requests further tests after seeing the initial results.

All of the diagnostic technology is integrated, which increases precision. Each machine in a conventional lab may calibrate differently, and the mix of brands and ages means results come with an implied “or so” at the end. Plotting results over time is therefore mostly useless.

Theranos offers a full range of laboratory tests for a consistently lower cost than most labs do now, and its prices are readily available through a mobile app and on the company’s website.

While a deal with Walgreen’s may not be Silicon Valley sexy, laboratory tests are a big lever in the health care system. In the U.S., they are the industry’s single highest volume activity, with over 5 billion tests performed every year according to a new Beth Israel Deaconess Medical Center study. Access to Walgreen’s will help Theranos get quick-and-painless testing close to most Americans.

Don’t tell the NSA we said so, but Singularity Hub is also betting that the military will use the instant lab tests. Our tip? The list of the company’s board of directors reads like a who’s who guide to recent American military history.