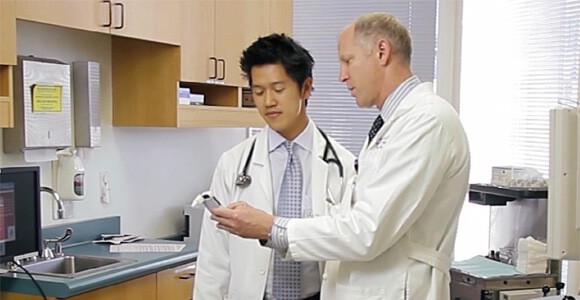 There’s no shortage of smartphone apps to help people track their health. And in recent months, medical apps have started growing up, leaving behind the novelty of attaching probes to a smartphone to offer, they hope, serious clinical tools.

Last month in a Ted Talk, Shiv Gaglani showed that a standard physical exam can now be done using only smartphone apps and attachments. From blood pressure cuff to stethoscope and otoscope — the thing the doctor uses to look in your ears — all of the doctor’s basic instruments are now available in “smart” format.

Gaglani described the project, called Smartphone Physical, as putting together “the new physicians handbag of the 21st century.”

The work has generated a lot of interest and will likely become the basis for a company. Working with fellow medical students Michael Hoaglin and Michael Batista, Gaglani has identified best-in-class devices and apps. The team is setting standards to continue to expand the list with apps and add-ons that are proven to work. They’re also exploring ways to make all of the individual tools work better together. 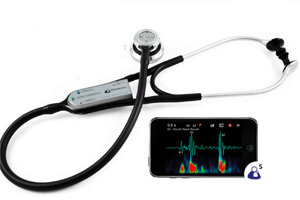 The current list of tools and explanatory website aim to raise awareness among doctors about the existence of the new technologies. There are no financial partnerships involved.

Some of the devices introduce aspects of crowdsourcing. For instance, the CellScope otoscope calls on a reference database of thousands of pictures of inner ears, whereas a single doctor will see only a fraction of that over the course of his or her career

Some of the instruments go beyond the tests performed in a physical exam. For example, SpiroSmart allows the iPhone to measure lung function by visually analyzing lip reverberation. (Traditional spirometers measure the air the patient exhales.)

The AliveCor ECG device reads cardiac activity, like its conventional counterpart, with electrodes. The electrodes and a single coin-size battery are all that’s added to the smartphone to create a machine accurate enough to be approved by the FDA.

Smaller, especially when it’s also cheaper, can be game changing.

For instance, MobiSante’s ultrasound wand substitutes the clunky and expensive imaging machine with a smartphone and a desktop application, making it both smaller and cheaper than traditional equipment. The company hopes the move will make ultrasound devices available in the 60 percent of the world where they’re currently not.

Even genetic diagnosis, or identifying a microbe by its genetic code, can now be done far from the lab using an add-on qPCR thermal cycler. (Singularity Hub has also covered a small standalone DNA amplifier from Lava Amp).

The devices don’t just give doctors more tools; they make it possible for patients to track their own health indicators between doctor’s visits. Blood pressure and lung function are prime examples. Of course, putting medical instruments in patients’ hands could exacerbate what Gaglani casually referred to as “cyberchondria.” (Yes, WebMD addicts, doctors are onto you.)

“There will certainly be a subset of patients who will try to interpret the data themselves. That’s going to happen, and there’s going to be some psychological ramifications for those patients,” Gaglani told Singularity Hub.

But patients also benefit by uploading their data and being able to document trends for the doctor during a visit. Research shows that patients who feel that they’re doctor is giving them personalized, rather than generic, advice are more likely to follow it. And doctors like simple instruments that allow them to focus more on patients and less on equipment during office visits, said Smartphone Physical’s Hoaglin.

Still, there are some glitches before smartphone physicals really take off. The doctor who tries to make his or her smartphone a mobile clinic of sorts currently has to navigate a number of different apps to drive each of the instruments. Some work for both Android and iPhone, but several only work on Apple devices. The data from each of the devices and apps also flow to different cloud platforms.

That’s an obvious target for Smartphone Physical as the project tries to convert what are now novelty devices into reliable medical equipment.