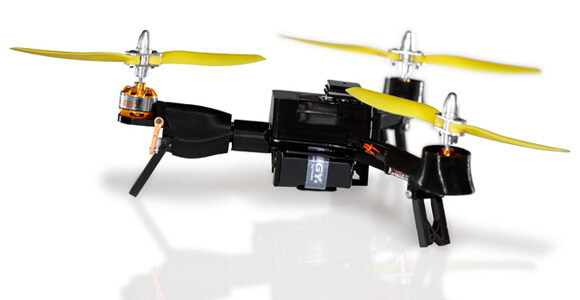 Those who consider themselves early adopters better brace for their next big gadget purchase: a personal drone.

Very early adopters have had the option to buy a drone kit — with a lot of assembly required. But in a current Kickstarter campaign, the Southern California company AirDroids hopes to appeal to a broader audience with a ready-to-operate book-sized drone, aptly named Pocket Drone, that sells for a manageable $495.

Billed as a high-tech camera mount that allows users to video their hikes and bike rides, get higher angles in their shots and appear in their own family pictures, the drone weighs just one pound and folds down to fit easily in a backpack. Loaded with a half-pound camera, it can fly for up to 20 minutes at a time. (A low-battery alarm warns the user that it’s time to land.)

“Now with the Pocket Drone, it’s never been easier to capture spectacular aerial images that open up a whole new perspective and insight that had previously been unseen,” the company promises in its crowdfunding campaign.

The controller relies on 6-axis accelerometers, 3-axis gyroscopes and an altitude sensor. The version set to ship in mid-2014 works with Mac, Linux or PC desktop operating systems, but just Android mobile OS. The software is open-source.

So just how does an Average Joe control a drone? The tri-copter connects to a standard radio controller or an app that displays a virtual joystick on a tablet. Users can also map out a route for the vehicle using Google Maps or select “follow me” mode, telling it to stay close to the GPS-enabled mobile device to which it’s synched. Optional goggles allow the user to see what the drone is seeing at any given moment.

With a lot of new users, some collisions can be expected. If a user makes a rookie mistake and steers the droid right into someone else, the damage should be minimal thanks to retracting copter blades and a carbon-fiber body. AirDroids promises Pocket Drone is sturdy enough to withstand such mistakes.

Regulations addressing civilian drone use are still pending, but it is legal to fly a camera-equipped drone, an FAA spokeswoman told Singularity Hub. Individuals can operate unmanned aerial vehicles under rules established for model airplanes: Vehicles must fly below 400 feet, avoid airports and remain within sight of the operator.

Pocket Droid emerges from the Drone User Group Network, an ad-hoc drone advocacy group that “seeks to foster interest in the use of civilian unmanned aerial technology and demonstrate its positive potential for humanity.”

The consumer drone, targeted to photographers, emphasizes that there are any number of possible uses for UAVs other than their most notorious use as robotic killing machines. In addition to their proposed use as delivery bots, drones can be tasked with delivering emergency supplies in remote areas and surveying agricultural fields.

Still, because those on the ground can’t know what a given drone is doing, privacy rules remain a thorny issue.