Termite-Inspired Robots Erect Buildings Based on a Picture 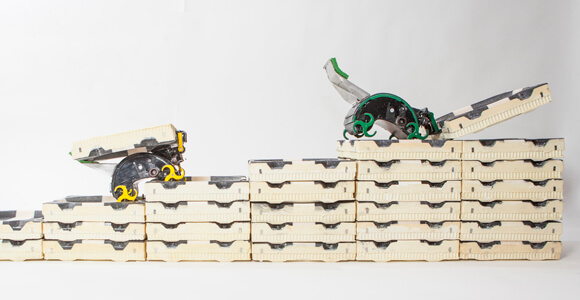 Robots are no longer a futuristic vision: Industrial robots are already performing controlled, repetitive tasks. But before robots can tackle diverse real-world situations that would expand their impact, they will need major improvements in both intelligence and mobility.

Take disaster areas and war zones, for example. Robots could deliver help to those who are trapped, sick or in need of shelter. But such settings are, by their very nature, unpredictable, making them challenging for robots. Many have proposed swarms of robots to handle these situations in a timely fashion, yet as the number of robots increases, so too does the complexity of controlling them.

A system of robots built by researchers at the Harvard School of Engineering and Applied Sciences and the Wyss Institute for Biologically Inspired Engineering demonstrates that robots can build human-scale buildings working independently with a set of simple rules.

“You can give the robots, in effect, a picture of what you want them to build. It doesn’t matter how many of them there are, together they’ll wind up building what you ask for,” said Justin Werfel, a roboticist at the Wyss Institute, and the lead author of a paper recently published in Science.

All the robots require is a picture of the structure they are tasked with building. A compiler annotates the blueprint and translates it into rules that prevent the robots from building themselves into a corner, for example. Then the individual robots start working and keep at it until the pictured structure is finished. Because the robots, about as big as Soapbox Derby entrants, can climb structures as they build them, they eventually produce human-scale buildings.

The setup, called TERMES, is inspired by termites, which can build tunneled mounds up to 40 feet tall even though their work is not coordinated by a foreman or queen. The system builds on robot swarms modeled after ants and bees.

The TERMES robots have ninja-disk shaped wheels to help them clamber over the building blocks used in the experiment. They rely on three motors, one for each side of the wheels and one to operate the “claw.” Their sensing is limited to their immediate surroundings, since they don’t need to know what their counterparts are doing. Each robot uses an infrared sensor, an ultrasound sensor, and an accelerometer.

In the building projects documented in the recent paper, the bots used special 3D-printed foam blocks with a circular indentation that makes it easier for them to turn around while perched atop the block. The specialized equipment means teams of TERMES couldn’t simply be sent to the Philippines or to Haiti tomorrow to assist with reconstruction.

Still with modifications, the same basic ecosystem could control robots that would lay sandbags ahead of a flood, or even set up a human habitat on Mars in advance of human arrival.

A swarm of independent actors isn’t better in every situation, however. The TERMES robots are slow and make mistakes; the rules simply keep their mistakes from cascading. A central controller, the most common way to control groups of robots, would result in more efficient work. But as the number of robots and/or the size of the area where they’re working increases, central control becomes less advantageous. What’s more, if a central controller failed, the whole system would grind to a halt.

Sometimes, even with robots, it takes a village to get something done.