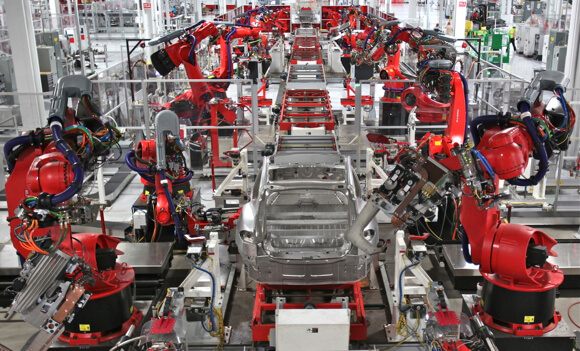 A little over a year ago, Foxconn, the notorious Taiwanese manufacturer of Apple’s iPhone, said they would replace a million Chinese workers with robots. Now, the firm says they plan to transfer capital-intensive and high-tech manufacturing to the US.

The two announcements are closely related. Just as cheap labor and competitive firms like Foxconn lured US electronics companies to outsource manufacturing to Asia—new generations of advanced robots may be set to bring it back. (Note: Though there are fewer manufacturing jobs due to automation, the US still “makes” plenty of stuff.)

China, where Foxconn operates its iPhone plant, has been vilified in recent years for “stealing” US manufacturing jobs, as have the multinationals assembling products there. Most folks (often politicians) cite the fact Chinese factories can pay lower wages than their American counterparts.

But lower wages are only part of the story. A 2012 New York Times article related an encounter between the late Steve Jobs and President Obama. Obama wanted to know what it would take to bring iPhone assembly to the US. Apple’s CEO was blunt, “Those jobs aren’t coming back.”

He went on to explain that when Apple redesigned the screen in the original iPhone just weeks before launch, 8,000 Chinese workers who lived on the factory grounds were immediately awoken, given tea and a biscuit, and set to work refitting screens. A mere 96 hours later, they were pumping out 10,000 iPhones a day.

“The speed and flexibility is breathtaking,” Jobs said. “There’s no American plant that can match that.”

Behind those words was an unspoken, controversial fact. No American plant could compete, in part, because the working conditions Jobs described would be considered unacceptable. China on the other hand has fewer such regulations, and therefore, it’s faster, cheaper, and more convenient to assemble electronics there.

But if it’s been so financially sensible for Apple (and other firms) to make their products in China and ship them thousands of miles back to the US—then, Foxconn’s new plan signals something powerful is changing the cost equation.

What is that something? Robots, of course. Increasingly affordable robot labor is taking the cost advantage (and PR risk) of operating in less regulated countries and throwing it out the window.

You can work robots as hard as you want—and wake them in the middle of the night without tea and biscuits—and you can do it anywhere in the world.

The cost of human labor varies with local laws and regulations, but robot labor is apolitical and therefore more consistently and predictably priced. Because of that fact, it makes more sense to locate your factories in your biggest markets whenever possible.

Now, to be clear, robots have long been a part of manufacturing. What’s changed, and continues to change at a rapid pace, is the cost and competency of those robots.

Thanks to computer vision and machine learning algorithms, robots, once consigned to carefully controlled tasks, can now function more like human workers. And due to cheap sensors and chips, they’re more powerful per dollar. Not all manufacturing has been automated, but it’s headed in that direction.

“Automation, software and technology innovation will be our key focus in the US in the coming few years,” Foxconn chairman, Terry Gou, told reporters at a recent press event.

That may mean more electronics manufacturing in the US, but Jobs was still right. Most of the manufacturing jobs of the halcyon days of yore are gone for good. Future manufacturing will require but a skeleton crew of humans to attend the robots.

But it’s better than the alternative. Manufacturing is exactly the kind of work machines ought to do, the kind of work that frees humans from dangerous, monotonous tasks. Without automation, most of us would be consigned to plowing the field. There would be no time to develop cancer cures or form garage bands.

Some foresee a time in the not too distant future when robots doing everything will cause mass unemployment and inequality. Right or wrong—and a heavy burden of proof is on the hypothesizers—the resurgence of that line of thinking, at the least, signals huge technological advancement and upheaval is afoot. Similar arguments have been made at every great leap forward in the last few hundred years.

But optimism is also warranted. Today, as in the past, technological change has the power to deliver greater abundance, freedom, health, and creativity—and whatever we do for work, fewer humans will be Foxconn cogs in the industrial machine.