The latest 3D printing Kickstarter smash hit, the Micro, raised its target $50,000 in eleven minutes. The Micro bills itself as the first truly consumer 3D printer—it plugs in with a USB cable, costs $299, and has raised nearly $3 million (and counting).

In a quick survey, we recently counted no fewer than 35 funded 3D printer Kickstarter campaigns, and more were unfunded. CES 2014 featured some 30 3D printing booths. Even Martha Stewart is getting in on the action.

3D printing is hot, fires the imagination, and has all kinds of potential. 3D printing, however, is not for you. Or at least, that’s one prominent storyline. 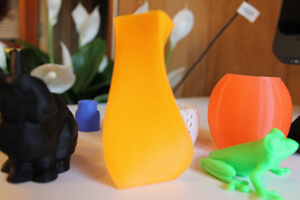 Beyond the hype, consumer 3D printers can’t make anything your heart desires—they mostly make junk, and there are only so many synthetic orange dinosaurs in top hats one person can collect.

While this argument is true, after a fashion, the field is continuously improving. And not so long ago, affordable consumer 3D printers didn’t exist at all.

The selection of desktop machines is growing. Desktop printers are increasingly available for around $1,000 or less. And setup is easier. Whether the printer connects by WiFi or USB, more printers are nearing plug-and-play.

The Micro, for example, connects to your computer by USB. At 2.2 pounds, it’s lightweight compared to the 3D Systems Cube at 9.5 pounds and more than that for higher-end models. Its auto-leveling and auto-calibration aim to reduce user intervention.

The Micro’s software includes a touch interface for ease of use (though realistically, we wonder how many people will be using it with a touch screen) and allows users to shop 3D files online and store them in a library, ready to print.

We won’t say it’s the “most” or the “first,” but according to M3D, their printer is comparatively quiet and power efficient.

So, is it the first truly consumer 3D printer? We don’t know exactly what that means. If we did, we’d probably be rolling in dough right now. (Though the Micro is clearly on to something—they’re on pace to beat Kickstarter records set by Pebble and Oculus.)

But what will it take for 3D printers to become standard household equipment like their less alluring 2D counterparts? Cost, speed, quality, ease, materials, and a reason to buy (that isn’t starry-eyed gear love) are a few key drivers worth tracking.

First, cost. 3D printers in the sub-$1,000 range are often DIY machines (like the open source RepRap) requiring assembly. Pre-assembled consumer printers tend to be more expensive, like the 3D Systems Cube ($1,300) or Zim (funded on Kickstarter) that will retail for about $899. The Micro, meanwhile, should be ready out of the box for $299.

But what about quality? Most of these desktop machines don’t make terribly high-quality products. You’ll end up sanding imperfections to make them look like advertised models. Printers capable of high quality print jobs still run $2,000+.

Brad Moon of InvestorPlace, a self-professed gearhead, got bored testing the Cube when he ran out of cool things to print. And his experience may be more representative of the general public—excited at the prospect of 3D printing but not terribly motivated to tinker and mess.

Moon printed a rook for chess—and then he did the math to finish a full set.

At $100 in materials and 64 hours of print time, you might as well buy a marble or wood set. Removing cost and material advantages, you’re left with customization and novelty. These aren’t worthless. But are they worth hundreds or thousands of dollars? (This depends on the person, but the answer, in general, may still be “no” for most.)

Another issue is how easy it is for a novice to pick up the tech.

With the Micro, Cube, and Zim, the hardware is getting simpler. But the software is still hit or miss. Online marketplaces offer plenty of designs, but not all design file types are compatible with all printers. And simple software is at the same time limiting. You’ve still got to be moderately geeky to exercise complete 3D printing freedom.

When I first heard of 3D printing, I imagined a kind of at-home hardware store where I’d be able to print any replacement part, bolt, screw, or tool I needed. Maybe that’ll happen, but currently, desktop 3D printers have a materials problem.

To paraphrase the Graduate—one word, “Plastics.” And rather flimsy plastics at that. You can print cookie cutters, plastic teacups, or a plastic mold to cast a rubber mold to make custom chocolates. But you can’t make tools or replacement parts. (At least none that will hold up to much use and abuse.)

That may change in the coming years. The expiration of patents for fused deposit modeling (FDM), the dominant tech in desktop printers, contributed to the recent round of increased competition and capability at decreasing costs.

And maybe affordable multi-material printers bring with them that last and all-important improvement—an irrefutably useful purpose. Maybe it’ll be akin to the at-home hardware store.

Or maybe something no one’s even talking about yet.

Pete Basiliere, research director at Gartner, says, “We expect that a compelling consumer application—something that can only be created at home on a 3D printer—will hit the scene by 2016.”

According to analysts, 3D printing prospects, in general, look fine. Citigroup’s Kenneth Wong expects 200% growth in the next four years. The industry as a whole will grow from $2 billion to $6 billion. That sounds like gangbusters growth, and it isn’t bad—but to scale, $6 billion is a relatively small market and 200% fairly modest growth.

For example, take a practical technology with an obvious use like LED light bulbs. According to GE, LEDs make up about $10 billion of the $66 billion global lighting market. GE expects them to grow to $70 billion of a $100 billion global market by 2020.

The future of consumer 3D printers is comparatively uncertain. Which means the analysts could be right—or completely off target.

In a recent keynote at the Inside 3D Printing conference, Carl Bass, CEO of Autodesk, said, “I think we have way overvalued consumer 3D printing and truly underappreciated the value of industrial 3D printing.”

He believes instead of having a 3D printer at home, people will use 3D design marketplaces like Shapeways and Thingiverse and outsource printing to third parties with access to high quality, professional grade printers.

He’s right that 3D printing stands to have a greater impact in industrial settings in the near term. And he may further be right about the consumer market—if improvements to desktop 3D printers and software stall. But what if the big, expensive professional 3D printers of today become the miniature, affordable consumer printers of tomorrow?