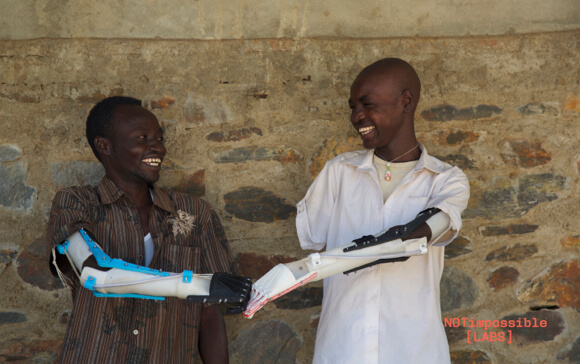 We often write about 3D printing and how, combined with other computer-assisted technologies, it might remake the industrial landscape, but rarely does the tech’s impact seem so immediate and clear.

Using naught but string, a lump of plastic, a computer, and a 3D printer—Ebeling manufactured a simple, functional prosthetic arm in a refugee camp in rural Sudan. It’s not Luke Skywalker, but it’s a significant improvement over the alternative.

There are two beginnings to this story.

Ebeling founded Not Impossible Labs to tackle audacious projects with big positive impacts—naïveté, he says, is the key to innovation. One of Ebeling’s first endeavors was a communications device called Eyewriter for Tempt One, a graffiti artist paralyzed with ALS. Eyewriter translated Tempt’s eye movements into an onscreen painting.

Not Impossible Labs posts their open source designs online hoping others will improve them. A group of Samsung engineers in South Korea picked up Eyewriter, refined the design and began providing hundreds of the devices to ALS patients. They open-sourced their design too, and now, anyone can make one for about $50.

One morning, Ebeling found himself reading an article about Daniel Omar—and he thought, we have to help this kid and others like him. But how?

The answer was already out there in the form of another open source project.

After Richard Van As lost his fingers in a circular saw accident a few years ago, he teamed up with Ivan Owen, a Seattle mechanical props designer, and the two began work on a simple 3D printed DIY prosthetic hand. We covered the pair’s Robohand last year, when they began making them for kids with Amniotic Band Syndrome.

Ebeling learned of Robohand and realized it would be a great solution for Daniel. Van As gave Ebeling a crash course in 3D printing on Robohand design and assembly, and just three months after reading the article about Daniel, Ebeling touched down in Sudan with a few boxes of materials and two 3D printers.

Using his new arm, Daniel was able to feed himself for the first time in two years, throw objects, and use a computer (below). But it wasn’t just about Daniel. Ebeling hoped to provide the know-how and materials to make more prosthetics. 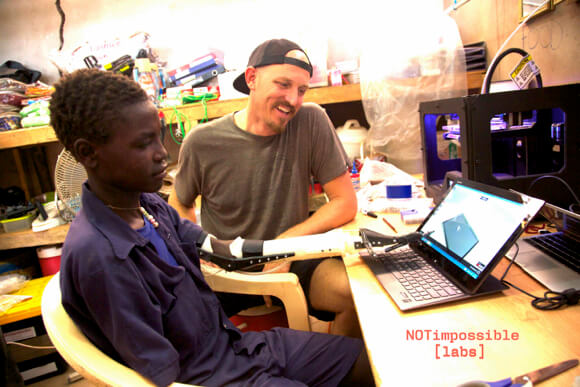 Ebeling and Dr. Tom Catena, an American physician working with amputees in Sudan, taught the locals to make more 3D printed prostheses and gave them a 3D printer and materials. By the time Ebeling returned home, local trainees had printed, assembled, and fitted another two arms. They’ve printed an arm a week since then.

“We’re hopeful that other children and adults in other regions of Africa, as well as other continents around the globe, will utilize the power of this new technology for similar beginnings,” Ebeling said in a press release about Project Daniel. 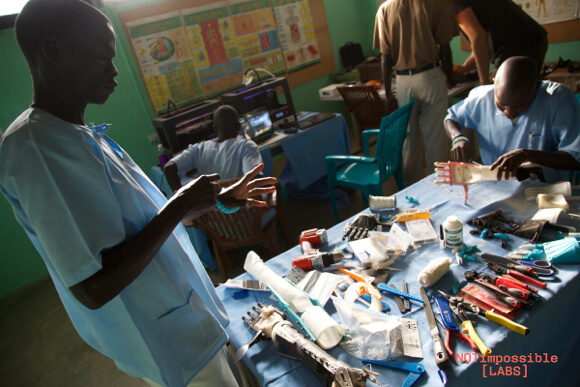 He’s right to see the potential of such technology. Increasingly, 3D printing is making a difference in health and medicine, from custom 3D-printed body parts (like a cranium or trachea) to even, eventually, entirely 3D-printed organs.

Though non-industrial 3D printing isn’t fully mature yet—that is, you can’t pick up the tech and start making prosthetic arms without training—it’s headed in that direction. And Project Daniel seems to show it is mature enough that, with a little training, people can learn to make much-needed, specific items, like prosthetic arms.

In the future, 3D printing promises to bring custom, industrial-grade products not just to private homes in the heart of developed nations, where access to such products is only marginally improved (more a matter of convenience), but to the fringes of the developing world, where access is either very limited or non-existent.

War in Sudan has left some 50,000 amputees in its wake. Using 3D printing to make prosthetics where they are most needed but least available is an incredibly hopeful idea.