NeuroGrid — A Circuit Board Modeled after the Human Brain 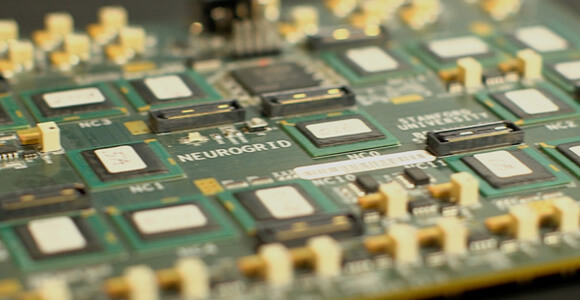 Although the basic computer architecture we rely on was designed to handle math and logic problems, it’s done a bang-up job of tackling everything from word processing and socializing to controlling the movements of artificial limbs. But as we demand increasingly human-like work from machines, pressure is mounting to rejigger and expand their basic architecture to better jibe with the brain’s way of doing things.

If we ever want to be able to run a computer that simulates the hundred billion neurons at work in a human brain, though, each of its silicon chips will have to sip, not gulp, energy. And while computers will have to process information through pathways more organic and complex than the classic von Neumann architecture, they will have to keep up a demanding pace.

Eying those problems on the horizon, a team of Stanford University engineers led by Kwabena Boahen has developed a circuit board, and its underlying chips, that simulates the activity of a million neurons 9,000 times faster than a personal computer could and is 100,000 times more energy efficient. They reported the findings in a recent issue of IEEE.

The circuit board, called Neurogrid, consists of 16 custom-designed Neurocore chips. Each chip simulates 65,536 neurons. All told, the board can simulate 1 million neurons and billions of synaptic connections.

By way of comparison, the neural chips IBM uses consist of 256 digital neurons and a couple hundred thousand synaptic connections. Qualcomm has announced, but not yet launched, a neuromorphic chip.

“From a pure energy perspective, the brain is hard to match,” Boahen said in a news release. With 80,000 times more neurons than Neurogrid, the brain uses just three times the power, according to the article.

“The computer can compensate for its lack of parallelism by executing instructions blazingly fast, but it pays a steep cost in energy and time to shuttle far-flung data through its central processing unit,” Boahen and colleagues explain on the Neurogrid project website. 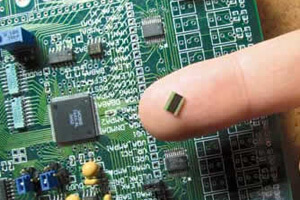 Here’s how the system works, briefly: The neuromorphic chip is analog to capture the variety of ionic signals the neurons filter in the brain. It includes shared electronic circuits to maximize “synaptic” connections, which are represented by way of pairing a particular ersatz-neuron’s address on the chip to a particular spot in the RAM. To maximize speed, the circuit board retains a tree rather than a mesh network.

While the chip would save money in energy use, it’s not cheap. The prototype cost $40,000 to make. But Boahen said that adopting modern industrial manufacturing processes and producing in bulk would bring the price down to $400.

Neurocore isn’t made for the garage user, anyway. Like most neural chips and networks, it’s designed to model brain activity for researchers. To accommodate different research objectives, it can be programmed to act like different cortical layers.

But lower power usage isn’t just a cost issue. It would free future human-acting robots from cumbersome power supplies and could eventually make it safe to implant computers in human patients.

Boahen plans to test the human-like capabilities of the chip by using it to power robotic limbs.

“It is important for us to show that the components of our system replicate their biological analogs. Otherwise, we will have a difficult time convincing others that our artificial brain is working like the human brain,” the Neurogrid website concludes.