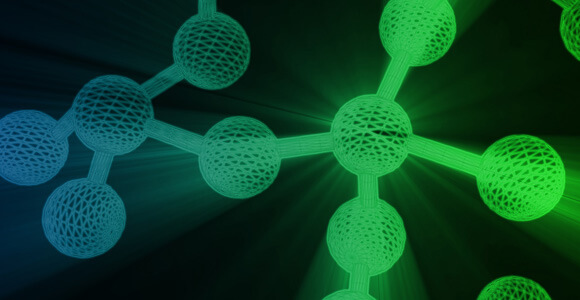 DNA isn’t just a blueprint that gathers dust once the building — you or me — is built. Rather, it is an active factory with assembly lines to run all the processes in our bodies, big and small, over the course of our lives. But why does the factory rely exclusively on four machines, the DNA bases G, C, A and T?

“I think it’s amazing that you look around the world, you can look around life and everything you see — all the differences that you see, everything is encoded in four letters, two base pairs,” Floyd Romesberg, a chemist at the Scripps Research Institute, told Singularity Hub. “It was a really interesting conceptual question as to whether or not there was some reason that was the case: Is G, C, A, T the only possible solution?”

To get an answer, Romesberg and his colleagues tried working with a host of other potential base molecule pairs. Recently, they succeeded in inserting an extra set of bases into the DNA of an E. coli bacterium, and managed to get it to reproduce with the extra DNA bases in tact.

The E. coli replicated normally and didn’t act to remove the interloper base pairs. Because the extra bases — let’s call them as X and Y, though they are chemically known as d5SICS and dNaM — don’t exist naturally in cells, the researchers had to add them to the cellular stew along with an enzyme that would carry them into the cells. When the researchers stopped seeding the enzyme, the E. coli returned to its normal genetic state.

Romesberg and his colleagues have been working to develop artificial base pairs roughly since the first human genome was sequenced. d5SICS and dNaM were selected from among many other would-be pairs because they hook up across a double-strand of DNA almost as snugly and durably as the natural base pairs to form a zipper. The team then had to find the right enzymes to transcribe the semi-synthetic DNA into RNA and to allow the base pairs to replicate.

Their recent success, described recently in the journal Nature, means that the scientists now have a bit of their own machinery in the factory of life that is DNA. The insertion will most directly help guide further research into why the four bases G, C, A and T triumphed over numerous potential competitors.

“If one lab with only a few grad students and post-docs working can come up with a new pair in 15 years, that suggests that there are really nothing too special about G, C, A and T. They were just good enough, and other solutions were also probably good enough,” Romesberg said.

The next step will be to see if the machines can make stuff — specifically, synthetic proteins. Adding base pairs increases the number of possible three-letter protein recipes, or codons. The codons unused by nature could be dibsed by synthetic biologists.

“We’ve gotten cells to store increased information in their DNA. If we can retrieve this information that we’ve stored in DNA in translation into protein, we’ll have more of these codons and they won’t be already used for something. They’ll be free to encode what we want,” Romesberg said.

Protein-based medications are finding increased applications as the ability to get cells to make new molecules increases. New proteins, made by X and Y or others like them, mean new potential medical applications.

“The cells don’t make X and Y; we have to provide them with X and Y. That reassures us that they could never escape and do something bad, but it also precludes us from using them in an environment where they would have to replicate and grow under conditions where we would not be able to provide X and Y,” such as in the human body, Romesberg said.

In other words, the method won’t work to spur people who lack a particular protein, such as insulin, to make it for themselves.

But researchers have no shortage of ideas when it comes to applications for protein-based materials. For instance, nanotechnologists use DNA itself as a material, taking nature’s lead on how to construct durable microscopic objects; the presence of X and Y could let them customize their raw materials. DNA-based nanotech machines have also been proposed as a way of delivering drugs directly to a particular areas or type of cell.