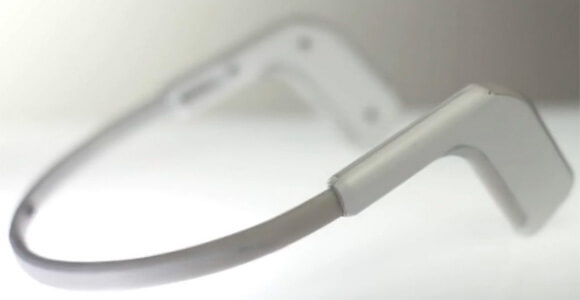 FitBit, Jawbone, Aero: Wearable devices to track physical activity are everywhere. But technology advocates insist that’s not all the devices can do — not by a long shot. The tiny machines promise to track our vital signs and share them with doctors. And eventually, many believe, they may be able to detect our brain activity and power computers hands-free.

Muse, a headband fitted with EEG sensors, is an early entrant in the race to that future. Made by the Canadian company InteraXon, the headband sells now with a soft sales pitch: Track your brain activity for a half and hour a day to train yourself to focus or meditate better.

The headband picks up four channels from seven EEG sensors, five across the forehead and two conductive rubber ear sensors. Together, the sensors detect the five basic types of brain waves, and, unlike conventional sensors, they don’t need to be surrounded by gel to work. Software helps filter out the noise and syncs the signal, via Bluetooth, to a companion app. The app shows the user the brainwave information and offers stress-reduction exercises.

The science to support the claim that EEG biofeedback can improve focus and relieve stress seems more suggestive than conclusive. The approach has been shown to help children with ADHD, for instance. Meditation, which tends to produce brain waves linked with relaxation and deep thought, has positive health effects, although it’s not clear exactly how.

That said, it’s pretty clear that watching your brain waves won’t hurt you, so if you want to spend $300 with the hopes of diminishing sturm und drang, why not?

InteraXon isn’t the first company to offer a mobile EEG: For instance, Emotiv’s headset connects to a mobile phone. But it is the first to make the EEG truly wearable and to give it a clear consumer use case.

InteraXon is also working a long play by opening up an SDK that will let others build apps using the brain activity information from the headband. More than one study has shown that, with EEG sensors, a user can control computerized objects by sheer force of concentration. EEGs are a fairly crude way to tap into a person’s thoughts, but there are plenty of uses for them even so. On the serious side, wheelchair app could allow the user to steer using Muse. On the less serious side, a music app could select music based on the user’s brain activity and a virtual reality game could sync its play scenes to the user’s mood to make the experience that much more compelling. This isn’t science fiction, even now.

A bit further down the road of possibilities is brain-to-brain networking. Last year, researchers at the University of Washington used EEG sensors to detect one person’s intention to move his arm and used it to stimulate the other person’s brain with an external coil and watched as the second person moved his hand without planning to.

So while Muse sounds a bit woo-woo at present, it — and likely competing EEG devices — will eventually bring much heavier hitting applications than tracking how many steps the user takes on a given day.