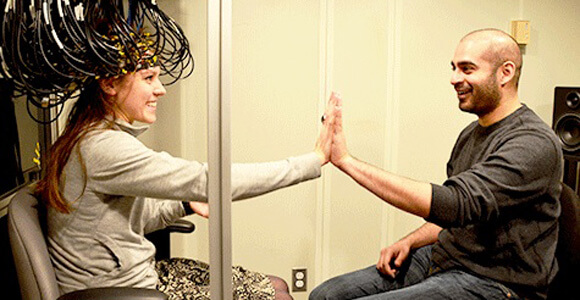 If research on the human brain is to come close to meeting the lofty hopes many researchers and government bodies have for it, one thing is going to have to change: Brain scanning will have to become a process that can be done in less restrictive situations and without the health risks that make some scanning methods an option of last resort.

Diffuse optical technology, or DOT, is closing in on the accuracy of the industry standard: functional MRI. Though the fMRI is accurate, it requires the patient to be immobilized in the machine, restricting how useful it is for understanding how the brain responds to stimuli.

In a study recently published in Nature Photonics, researchers debuted a new DOT, or diffuse optical tomography, instrument that could see two-thirds of the head and depict brain processes that take place in multiple regions and brain networks, such as those involved in language. The researchers, led by Joseph Culver, a radiologist at Washington University of St. Louis, compared the maps of activity created by DOT and fMRI scans and found a 75 percent overlap.

DOT itself isn’t new. For about a decade, doctors and researchers have looked to it as a more portable and safer alternative to fMRI scans. MRI technology uses magnets which interfere with the functioning of medical devices including pacemakers and cochlear implants. PET scans, another common method of coaxing a brain to do the equivalent of say ah, expose patients to significant levels of radiation. 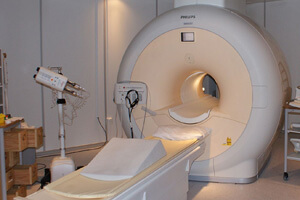 But because DOT uses light, rather than the MRI’s magnets, to observe increased blood flow to active neural areas, getting a full picture of what goes on in the entire brain has been the main challenge. (Here’s a useful illustration of how DOT works.) The technology only illuminates what goes on in the outermost centimeter of brain tissue, but that area includes some pretty compelling functions like memory and language.

“When the neuronal activity of a region in the brain increases, highly oxygenated blood flows to the parts of the brain doing more work, and we can detect that. It’s roughly akin to spotting the rush of blood to someone’s cheeks when they blush,” Culver said in a news release.

With their latest readings, DOT could potentially be used when an fMRI doesn’t make sense. Because it’s portable, it could be used in operating rooms or patients’ hospital rooms. 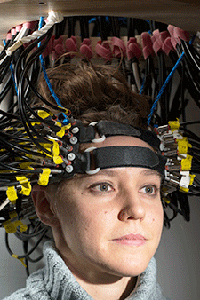 Let’s be clear, though, portable is a relative term; we are not talking smartphone size. The DOT unit used in the latest research is “an area slightly larger than an old-fashioned phone booth,” but some prototypes are small enough to transport on a hospital cart. The researchers continue to try to make the technology more portable. When that happens, patients could move around and interact more freely while researchers monitor their brain activity.

Imagine a totable brain scan that could be used repeatedly without health risk. Doctors could track the physical progress of patients recovering from brain injuries. They could also monitor the effects of brain diseases such as Alzheimer’s and Parkinson’s diseases and potentially disorders like autism. Potentially, patients could wear the device as it sends back brain activity from real-world situations.

In the current paper, Culver and his colleagues showed that DOT could be used to observe how electrical stimulation of the brain lessens Parkinson’s symptoms—something that can’t be done with magnetic resonance imaging — and they indicate they are likely to dive deeper into that project. Electrical stimulation has also been proposed as a treatment for Alzheimer’s disease.

When it comes to these ravaging, widespread and poorly understood conditions, better research methods are not just an inside baseball development — they could mean better treatments.