Even before birth, concerned parents often fret over the possibility that their children may have underlying medical issues. Chief among these worries are rare genetic conditions that can drastically shape the course and reduce the quality of their lives. While progress is being made in genetic testing, diagnosis of many conditions occurs only after symptoms manifest, usually to the shock of the family.

A new algorithm, however, is attempting to identify specific syndromes much sooner by screening photos for characteristic facial features associated with specific genetic conditions, such as Down’s syndrome, Progeria, and Fragile X syndrome.

Researchers at the University of Oxford utilized machine learning to train the facial recognition software to identify features from a database of 2,878 images acquired via the web. Of these, 1,363 photos were of individuals with eight known developmental disorders while the more than 1,500 other images were of controls. The software maps faces and account for lighting, image quality, and other factors, just as many other photo applications utilized by Google and Facebook can. Individuals with similar traits are clustered together and the software improves as more individuals with related traits are identified. 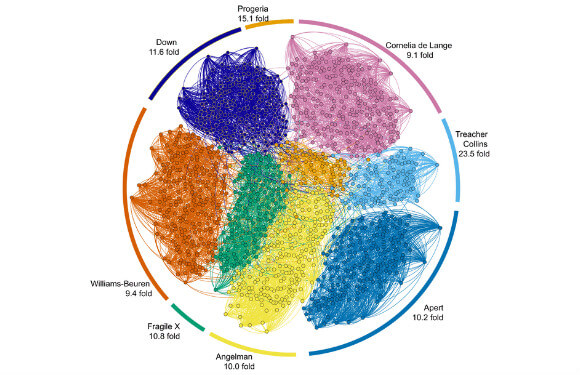 The work was published in the journal eLife.

“A diagnosis of a rare genetic disorder can be a very important step. It can provide parents with some certainty and help with genetic counseling on risks for other children or how likely a condition is to be passed on,’ stated lead researcher Christoffer Nellåker in the release. ‘A diagnosis can also improve estimates of how the disease might progress, or show which symptoms are caused by the genetic disorder and which are caused by other clinical issues that can be treated.”

It’s believed that 30-40% of rare genetic disorders, which may affect up to 1 in 17 people, involve facial phenotypes or changes to the skull or face, making this a promising approach for detection.

Nellåker added, “A doctor should in future, anywhere in the world, be able to take a smartphone picture of a patient and run the computer analysis to quickly find out which genetic disorder the person might have.”

Learn more about the research at University of Oxford news, “Computer-aided diagnosis of rare genetic disorders from family snaps” or read the study here.