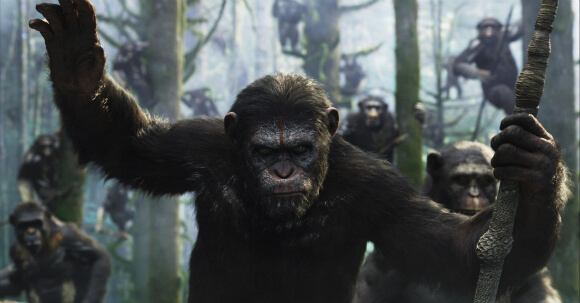 Summertime in the US means action-packed disaster films, and this year, it’s the monkeys who are coming to get us.

Hollywood is offering up the next entry in the Planet of the Apes franchise, which launched with the 2011 reboot Rise of the Planet of the Apes. In Rise, a drug designed to cure Alzheimer’s disease turns out to be fatal and wipes out most of human civilization, in the process spurring a race of genetically advanced apes.

Dawn of the Planet of the Apes, which opens today, further shows how the tides have turned. It opens with a small group struggling to survive in a post-apocalyptic San Francisco. The apes on the other hand, have done quite well. Caesar, the chimp raised by humans in Rise, is now leader of the nascent Ape population, having brought them to freedom and a new home in Muir woods.

In the interest of avoiding spoilers, here’s the trailer to the film if you haven’t seen it yet:

On the surface, the premise of the film is an absurdity only Hollywood could have devised: machine gun-slinging, horseback-riding, genetically evolved Apes out to hunt down humans. But this seemingly ridiculous idea stems from a fear which has been lingering in our collective subconscious for centuries. It’s a theme which even today creeps into much of our ongoing conversation about technology – specifically robotics, AI and synthetic biology – that we find it as an undercurrent in the news daily.

Will we be destroyed by our own creations?

Humans have been struggling with this anxiety for as long as we’ve been developing new technology. Early examples of this persistent fear can be traced back to the Greek myths of Icarus and Prometheus. Icarus flew too close to the sun with wings made from feathers and fell into the ocean and drowned when the wax melted. Prometheus brought fire to humans only to be eternally punished for his act.

Mary Shelley’s Frankenstein (1823) brought the theme to biological creation, and serves as a warning of the dangers of pushing the boundaries of technology to manipulate biology. The Frankenstein monster marks the beginning of the fear of the “artificial man”, which Isaac Asimov described as “mankind’s… gut fears that any artificial man they created would turn upon its creator.” More modern examples include Blade Runner’s “replicants”- biological automatons who seek to destroy their creator- as well as The Matrix, The Terminator, and countless others.

Dawn plays out the Frankenstein complex with highly intelligent apes. As actor Jason Clarke explained, “From the point of view of the humans, there is a lot of anger about how mankind has suffered because of the virus. The humans wrongly blame the apes for causing the virus, though humans actually created the virus in the lab a decade earlier.

There is a moment in Dawn when Koba, a chimp tortured by humans in a research lab before he was liberated by Caesar, pretends to be a ‘dump monkey’ performing somersaults and scratching himself. After the humans buy the ruse, Koba picks up a machine gun and shoots the men laughing at him. Later, Caesar explains Koba’s attitude of disdain towards the humans to his young son, saying “Koba learned to hate from the humans. And that is all he learned from them”.

Perhaps what we truly fear is that our creations will inherit the follies we have been unable to conquer in ourselves. It begs the question, can we be trusted to create responsibly?

Unlike the days when Mary Shelley wrote Frankenstein, today the synthetic creation of life is not the stuff of science fiction, but an emergent technology. As Craig Venter, author of Life at the Speed of Light, writes, “For centuries, a principal goal of science has been, first to understand life at it’s most basic level and, second to learn to control it.” And it suffices to say that given this, a major preoccupation of literature has been to question what would happen if we lose control.

By choosing to explain the existence of the original Planet of the Apes universe (originally written in the 1960’s), the makers of this reboot draw on both the long standing fear of our technological creations turning on us, and the cultural phobia surrounding current advances in biotechnology.

As biotechnology and the related fields of genetic engineering and synthetic biology become more powerful and widespread, we will inevitably feel a surge of anxiety over the incredible new power we hold in our hands. We’re likely to find ourselves caught in a struggle between the unquenchable yearning to use our infinite creativity to develop new technology and new life, and the profound fear that the very things we create will ruin us, that we will somehow be punished for ‘playing God’.

Some of these ideas are so deeply ingrained in our collective psyche that we accept them without questioning whether we should truly fear these things.

So far, we’ve not been wiped off the planet because of a reckless decision to create something that turns on us. The very fact that we play out these scenarios in summer blockbuster movies, instead of dealing with them in reality is at least comforting. More importantly, stories like Dawn serve as much needed reminders that as our abilities to manipulate life become more powerful, we must be conscious of how we use that power.