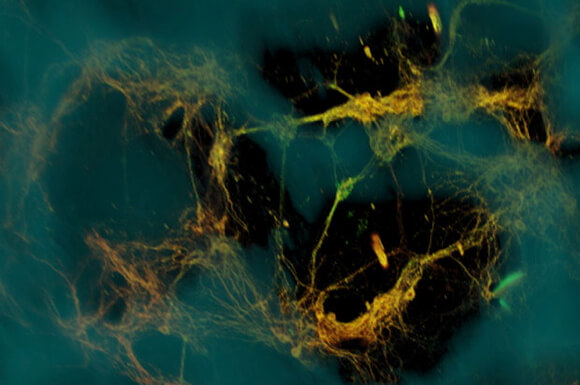 Currently, researchers study the human brain by inference. Because they can’t closely observe a living brain in the lab as its owner goes about his day—they do the next best thing, tracking blood flow and electrical activity as subjects perform various tasks.

Scientists, however, are now growing brain tissue in petri dishes to study neurons up close and personal. So far this lab-grown tissue can only grow in two dimensions, instead of the brain’s native three dimensions, and doesn’t form the typical segmented structure of grey matter (neuron cell bodies) and white matter (axon bundles).

However, in work funded by the National Institute of Biomedical Imaging and Bioengineering, David Kaplan of Tufts University and a team of researchers have created 3D brain-like tissue (using rat neurons) that is functionally and structurally similar to tissue in a living rat brain. Further, in contrast to prior methods, the tissue is long-lived—persisting for more than two months in the lab.

To demonstrate its potential as a research tool, the team used it to study the chemical and electrical changes induced by a traumatic brain injury and, separately, the changes due to a drug. Injuries and brain ailments affect the brain’s grey matter and white matter differently, so fully three dimensional tissue like theirs may enrich brain models.

When the scientists simulated brain injury by dropping a weight on the tissue, the behavior of the neurons in the tissue matched observations made in studies of similar injuries in animals. The method may prove superior to animal studies because there is no delay in observation (animal studies require dissection and sample preparation).

“With the system we have, you can essentially track the tissue response to traumatic brain injury in real time,” said Kaplan. “Most importantly, you can also start to track repair and what happens over longer periods of time.”

Other attempts to grow 3D brain tissue in gels—where neurons are free to grow and make connections in all directions—have failed to result in long-lived or healthy function in tissue. Providing enough space, as it turns out, is not the only requirement. Getting the composition of the environment is critical.

Kaplan’s team grew neurons on a scaffold (top image) with a central collagen-based gel surrounded by a donut of silk protein. The neurons anchored themselves to the protein and grew axons through the gel center. A few days later, the cells had grown networks in the silk (grey matter) and sent axons through the gel (white matter).

That the tissue is healthy and long-lived is significant.

According to Kaplan, “The fact that we can maintain this tissue for months in the lab means we can start to look at neurological diseases in ways that you can’t otherwise because you need long timeframes to study some of the key brain diseases.”

The team hopes to improve their method and make the tissue an even better brain analog by building a scaffold of six concentric rings separated by gel and populated by the six kinds of neurons that make up the various layers of the human brain’s cortex.

They hope that better models derived by studying living tissue in the lab will beget better candidate hypotheses for testing, and ultimately, all this will quicken the development of therapies for diseases and further our understanding of how healthy brains work.