When you think nanorobot, you don’t think just one. Or ten. You think millions or billions. Huge swarms of nanobots may work in concert with each other to accomplish tasks on tiny scales, perhaps in the human body, or more radically, to form larger robots, each nanobot functioning like a mechanical cell or 3D pixel.

Although we don’t have practical nanobots yet, we can work on the software that may coordinate them—and in fact, that’s exactly what a Harvard group has been up to.

Working out of Harvard’s School of Engineering and Applied Sciences (SEAS) and the Wyss Institute, researchers Radhika Nagpal, Michael Rubenstein, and Alejandro Cornejo first unveiled their quarter-sized Kilobots in 2011 when 25 of them were shown capable of performing synchronized actions.

The name Kilobot refers to the goal of building collectives of a thousand coordinated robots. That initial squad of 25 grew to 100 last year and now, most recently, to 1024. In a new video, the robots autonomously assume shapes with no more guidance than the original input from the researchers (e.g., form the letter ‘K’).

But we know from a flock of swallows or an ant colony that complex patterns can arise from simple individual behaviors. In this case, four Kilobots mark the center of a grid. Then, by hopping along the edge of the group and noting the relative distance to the center and each other with infrared transmitters and receivers, the bots shuffle into place. 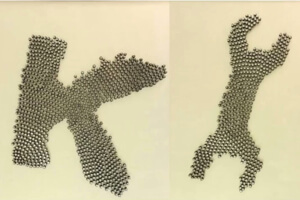 From these basic abilities they can form shapes—letters, a wrench, a starfish.

“Biological collectives involve enormous numbers of cooperating entities—whether you think of cells or insects or animals—that together accomplish a single task that is a magnitude beyond the scale of any individual,” said  Michael Rubenstein, lead author of the group’s recent paper in the journal Science and research associate at Harvard SEAS and the Wyss Institute.

Algorithms can be written and tested in computer models, but having real world robots to test them on is key. In practice the robots need to self-correct for problems like traffic jams and broken or wayward bots. Cost is also often a limiting factor. According to Harvard Gazette, only few robot swarms have so far surpassed 100 members.

In the future, we may see more and more machines behaving as collectives in groups that far exceed 1,000. But we won’t have to wait around for robots built on the nanoscale. Human-scale robots will benefit from coordination too—examples may include disaster response, environmental cleanup, drone delivery systems, or self-driving cars.

“Increasingly, we’re going to see large numbers of robots working together, whether it’s hundreds of robots cooperating to achieve environmental cleanup or a quick disaster response, or millions of self-driving cars on our highways,” Nagpal said.

Learn more about the research at the Harvard Gazette, “The 1,000-robot swarm.”