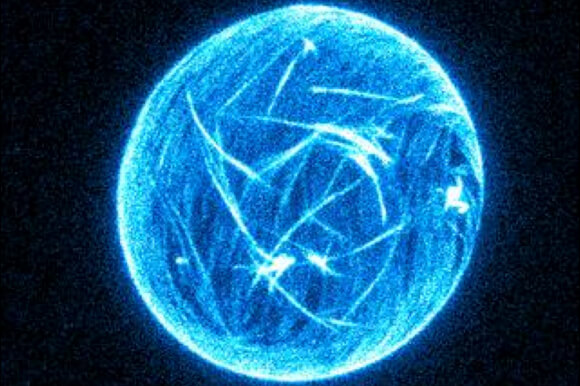 In the future, tiny machines may swim through our bloodstream repairing damage, attacking invaders, or taking real-time readings. We might even model such machines on biology. But biological cells are incredibly complex microscopic machines—and the truth is, we’re only just now beginning to understand exactly how they work.

One way to better understand how something works is to build a copy.

In a recent paper in the journal Science, a team of scientists at the Technische Universität München (TUM) say they have done just that. To better understand how our own biological cells work, the team created artificial protocells in the lab that can not only change their shape but even move on their own.

While we might be a long way from reverse engineering a heart or brain cell, the team took a back to basics approach. A few billion years ago, primordial cells were far simpler, consisting of little more than a membrane and a handful of molecules.

TUM’s artificial protocells consist of a membrane shell, or vesicle, two kinds of biomolecules, microtubules and kinesins, and fuel in the form of ATP, the same energy source used in biological cells. The kinesin molecules are like little motors running on ATP—in this case, they line up the microtubules and keep them in place.

This microtubule structure, or cytoskeleton, gives the protocell its shape.

“One can picture the liquid crystal layer [of microtubules] as tree logs drifting on the surface of a lake,” explains Felix Keber, lead author of the study. “When it becomes too congested, they line up in parallel but can still drift alongside each other.”

Although the log-like microtubules are mostly lined up, there are always a few faults, a few rebels that refuse to lay flat. Because the system is always internally in motion, these faults tend to migrate, and as it turns out, they help the protocell move.

The scientists discovered that when they removed water from the protocell, the microtubule faults predictably deformed its shape—the more water they removed, the more the cell deformed, eventually growing spiked extensions like the ones used by biological cells to move around in their environment.

From what at first appeared to be a random process, the researchers uncovered basic principles governing their protocell’s behavior. They hope these principles will underpin efforts to make predictions about other similar cellular systems.

Before that happens, however, more research into cell mechanisms is needed—and to that end, he said, TUM’s artificial protocells are a major contribution.